Sometimes when you are withdrawing money from a foreign ATM, you are presented an option for the bank operating the ATM to do the currency conversion for you instead of Visa/MasterCard. Also, when paying for hotels or other expenses in a foreign country, you are often given similar option to pay in the currency of you home country.

You should ALWAYS decline these offers and here’s the reason why. The rates that are offered are NEVER markets rates. The bank operating the ATM or the bank who is handling the credit card machine is offering you a rate that is anywhere from 3% to 7% off from the actual market rate. This conversion is done for your “convenience”, when in fact it does nothing else than increase their fee income. It is better to let the network to do the conversion using the actual market rates.

Why merchants allow banks to offer this option for their customer? For merchants that do lot of foreign transactions this practice can be quite lucrative, as the banks are offering them kickbacks based on the forex spread they have been able to charge.

Here are two of examples from the past week in China. In both occasions it took significant amount time to get the hotel to run the transaction using a point of sale machine that doesn’t participate to this dynamic currency conversion that I would just call a scam.

When I was checking out at the club lounge of the Renaissance Beijing Capital Hotel, I immediately saw that they were trying to charge me using an inflated rate. I found it amusing that they actually print words “NO COMMISSION FEE”, when the rate that they charge already has it built in. The two people working the lounge insisted that this wasn’t the dynamic currency conversion and that I would be charged with the local currency that was completely not true. I had to get manager involved and have this charges at the main front desk, where they had a point of sale machine that didn’t participate to this “scam”. The “commission” fee rate that the hotel tried to charge, as you can see from the attached picture, was $103.92. The actual charge that posted to my credit card using the non-DCC machine was $100.28. The spread would have been 3.6%. 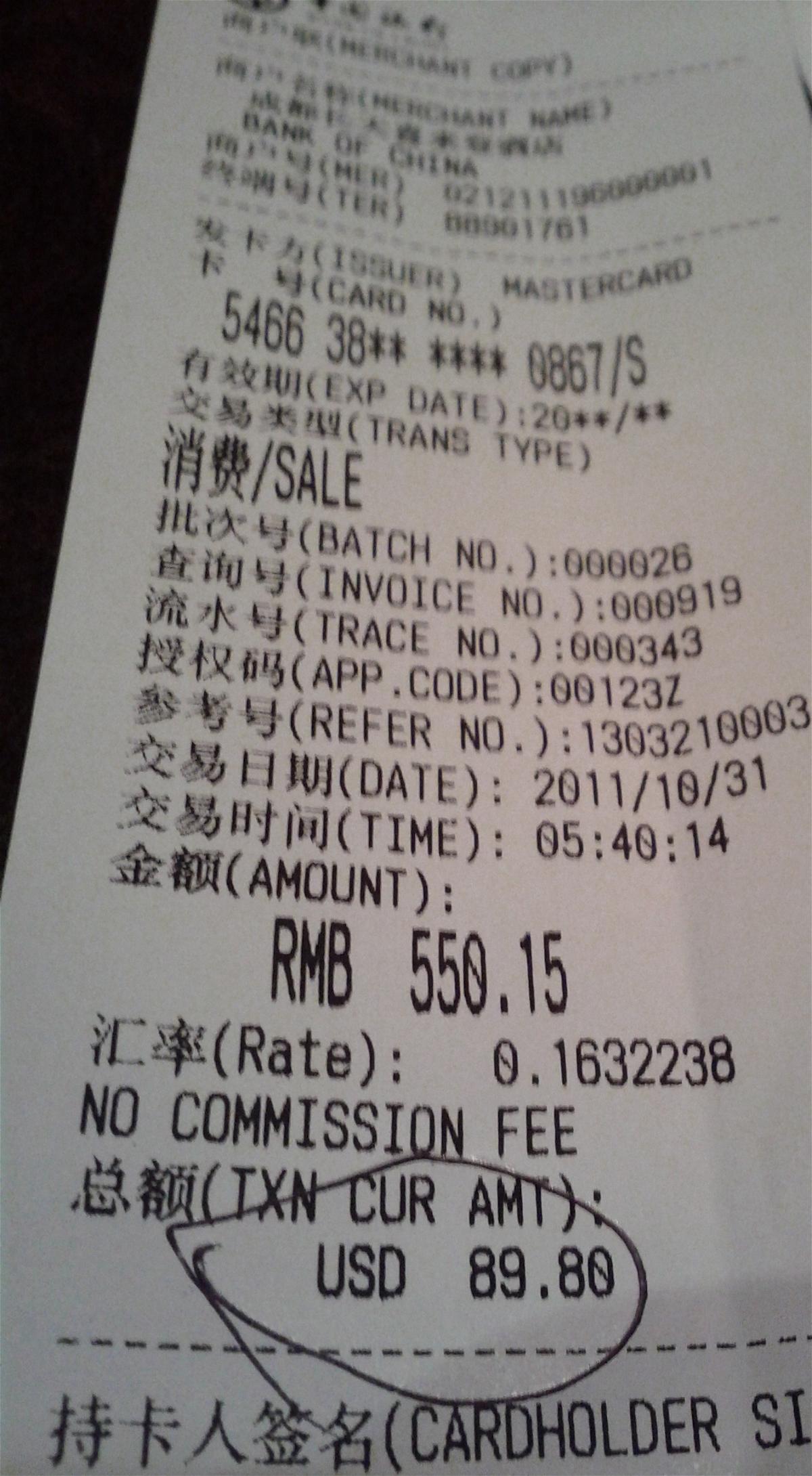 Couple of days later I was staying at the Sheraton Chengdu hotel. I was checking out very early in the morning and was already prepared for this discussion. Young lady first put the transaction through using point of sale machine that was offering a rate of $89.80 again with the text NO COMMISSION FEE.  Had to get a manager involved that just used another point of sale machine. The charge that posted to my account was $87.19. The DCC rate offered was off exactly 3%.

One might ask, why bother wasting time when the actual rate is of by few percentage points? For me it is more the matter of principle, as I don’t want to see this practice to spread more than it already has. All these few points here and there add up over the year for hundreds if not thousands of dollars for a person who travels a lot.