Over the past couple of days there has been chatter on frequent flyer message boards like FlyerTalk.com that Aeroplan had started unannounced to charge fuel surcharges on number of Star Alliance carriers. Aeroplan or actually Aimia, as the parent is now called, is a separate publicly listed company in Canada. Aeroplan had already for years collected so called fuel surcharges (YQ) on Air Canada metal flights. 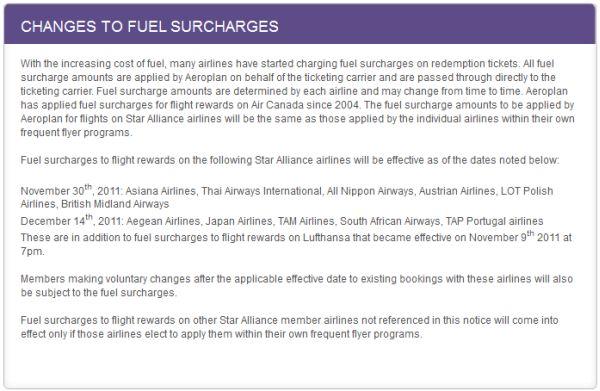 Here’s one example on a flight from Vancouver to London. The base fare is $377 CAD and the fuel surcharges $370 CAD. Now, if you plan to redeem your Aeroplan miles on Air Canada or Lufthansa flights, the miles will only cover the base fare. You need to fork you $$$’s for the fuel surcharges and actual taxes.

Now back to Aeroplan. They suddenly started to charge these YQ’s on Lufthansa, Austrian, Asiana, ANA, and Thai Airways flights, only to backpedal day later and charge them only for Lufthansa flights in addition to Air Canada ones.

As you can see from the top image, they started to charge these fuel surcharges on Air Canada’s request. Where it comes murky is the following statement “All fuel surcharge amounts applied by Aeroplan are passed through to the ticketing carrier for settlement”. The ticketing carrier on all Aeroplan issued award tickets is surprisingly Air Canada. Whether these surcharges are actually ever passed to the operating carrier or somehow divided, we never know. The even scarier art of this release is the following part “Other Star Alliance member airlines will be added as applicable”. My advice would be to start using those Aeroplan miles at your earliest convenience and avoid Air Canada and Lufthansa metal flights.

Lufthansa Now Sells Access To Their Frankfurt First Class Lounge For 149 EUR, Others From 29 EUR