Just stayed at the newly opened Aloft hotel at Sukhumvit 11 in Bangkok, Thailand. The opening of the hotel was delayed several times due to constructions issues, and later due to the flooding situation in Bangkok. The hotel finally opened its doors on December 1st, 2011. I have previously stayed at handful of Aloft properties, but all of them have been int he United States. Often, even limited service hotel concepts like Aloft, have more full service offering in the Asia due to competition and lower labor costs.

The hotel is done very nicely. One could use words modern chic, to describe it. I especially liked the way the ground floor and the second floor set up was done.

– Without any Starwood status? Maybe as long as the price is in line with the competitors.

There are several options for getting to a hotel from the Bangkok international airport. I wrote about them earlier in the week. Took a taxi from the departure level at the airport, as I always do, to save the 50 THB airport fee. There was no traffic on Sunday afternoon, so it took about 30 minutes to the hotel and the fare was 201 THB. I normally give 20 THB tip and of course pay the tolls (25 THB and 45 THB). Just told the taxi to drive to the Sukhumvit soi 11.

The hotel right now is about half finished. Of the 33 floors the first 18 are ready. The rest are planned to be finished by March/April 2012.

There is no separate check in area or even a sign for Platinum or Gold members. It was not a problem during my visit but most likely will be when the hotel is completely build and at capacity. 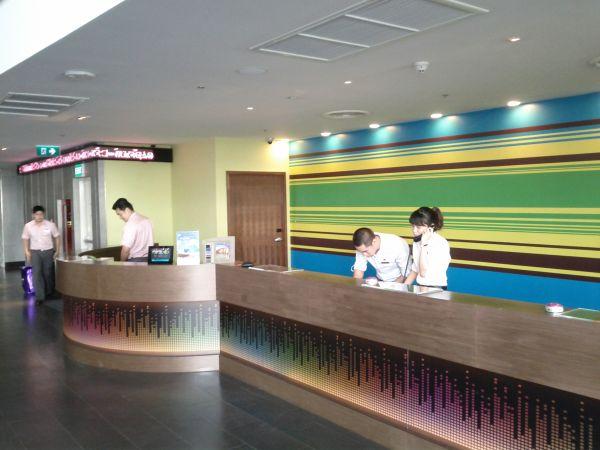 I was very curious to see what they were offering for SPG Platinum members considering all the other Starwood options in Bangkok that go above and beyond what is required by the program. I was surprised to find out that they basically didn’t offer anything besides a coffee.

– The entrance fee waiver is included for all staying at the hotel for Bed Supperclub and Q Bar that they advertise as the “trendiest” bars in Bangkok. I agree that they were trendiest at one point, maybe five years ago, but not anymore. You can get a free access and a drink to Bed Supperclub if you check in using the FourSquare mobile application and enter before 11PM.

– They were offering a “drink” coupon. It is valid for coffee and other coffee based drinks. I have received something like this at various Aloft’s in the United States, so it is probably a brand standard as well.

– They do NOT offer a breakfast or evening happy hour for Platinum members.

I made a short YouTube video using a cell phone.

Overall, they have used the 30 square meters well better than some of the Aloft’s in the United States. Also, they have a proper AC system unlike the window units found in the States. There was a small sitting are on the left side of the room, next to the window, that should fit maybe three people. On the other side was a small work area and connectivity panel that you can use to stream your own content to the TV. There was also some space below the TV, which is between the sitting and work areas, for storing bags.

The shower setup is similar to the other Aloft’s with shampoo/conditioner and shower gel pump bottles. The soap bar is bit different though. It is not the blueish Bliss bar, found at all other Aloft hotels I have been to, but rather white looking generic Aloft branded one. I liked the fact that they had the razor and dental kits available in the bathroom without having to request them. There was a problem with the shower. The shower head was not on high enough for me. My head was touching the shower, and I am not that high. 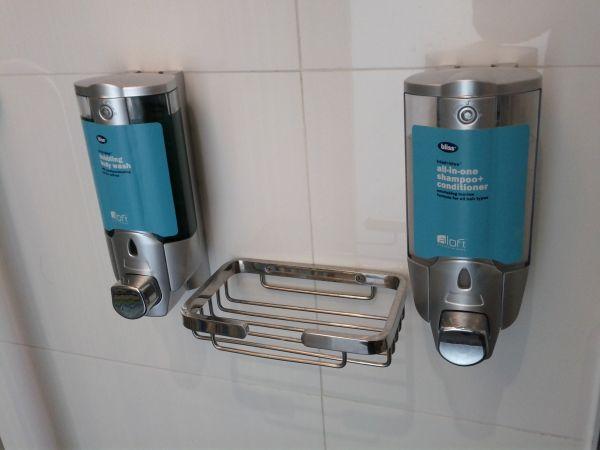 The bed is in the middle of the room as in all Alofts’. I do think, however, that the bedding material used here is better than the one used at the US ones. Room has a small minibar with some soda and couple of beers. They also have some potato chips, nuts, and condoms for sale.

They have both on the 10th floor. The infinity type pool is on the shadow for part of the day. There are quite a few sun chairs out. There is a small pool bar area too with quite a few colorful bag like chairs that they have on the lower floors as well. 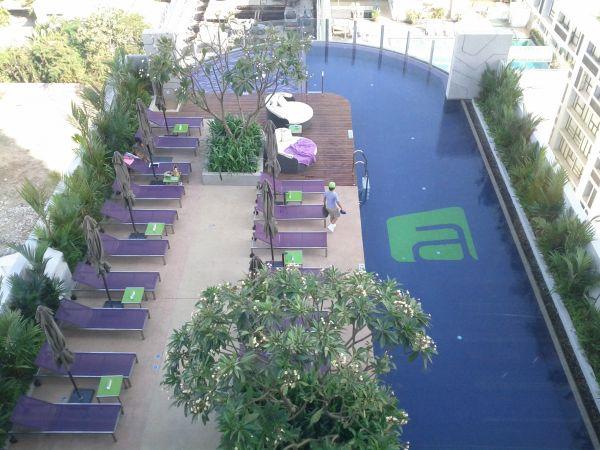 Fitness center is a see through glass ensemble next to the pool area. They have the usual cardio set up with built in TV’s. First, they said that they didn’t have headphones available, but later when I did go to do my exercise every machine with TV had them. 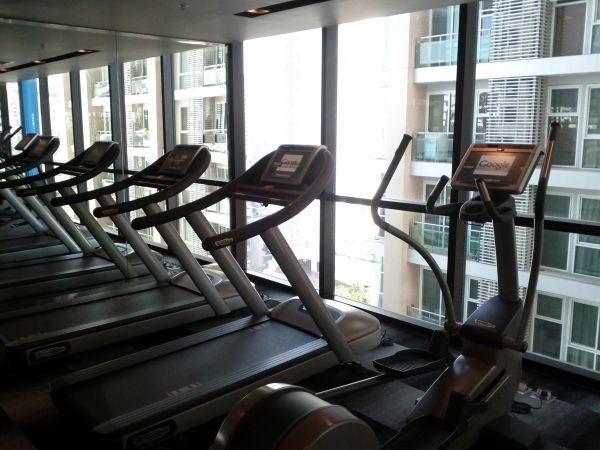 They have a temporarily restaurant on the banquet floor. Not sure where the restaurant will be when the building is finished.

The WXYZ bar, which is normally at the lobby level in the US Alofts, is located on the second floor here. I think that this set up is actually better because there is potentially less noise from the bar area when checking in.There is plenty of space on the second floor and the set up is very open. 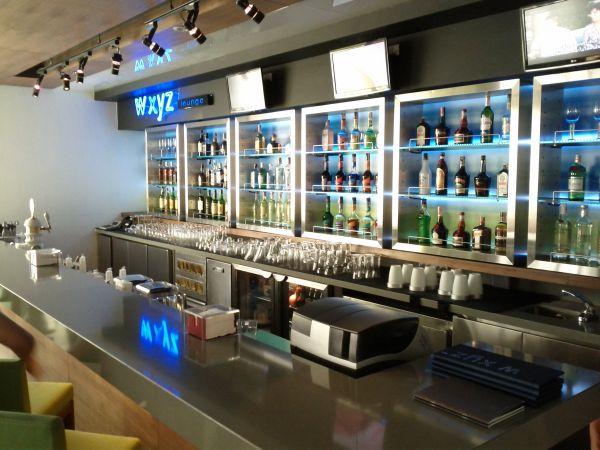 The check in area is on the right when you walk in. On the left are sofas and TV’s where people can lounge. Bit further down is the refuel cafe/snack bar where you can buy salads and sandwiches, and your favorite coffee and other beverages. After the refuel there is a pool table and more space to sit down and have a chat. 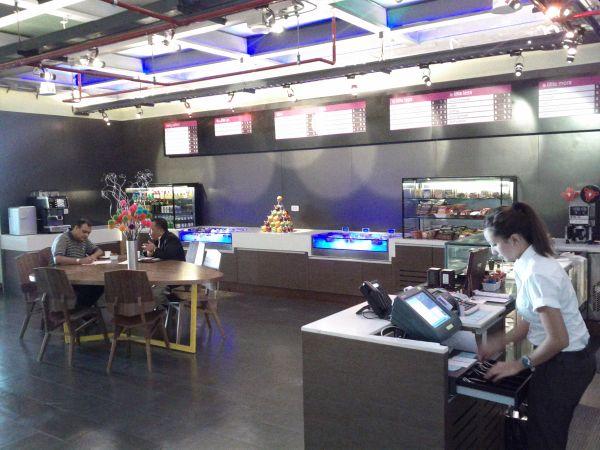 Overall, the ground level and second floor are is very tastefully done and looks nice. I wasn’t at the WXYZ bar at the night, so not sure how the set up worked over all. At least there is plenty of space to linger and move around. 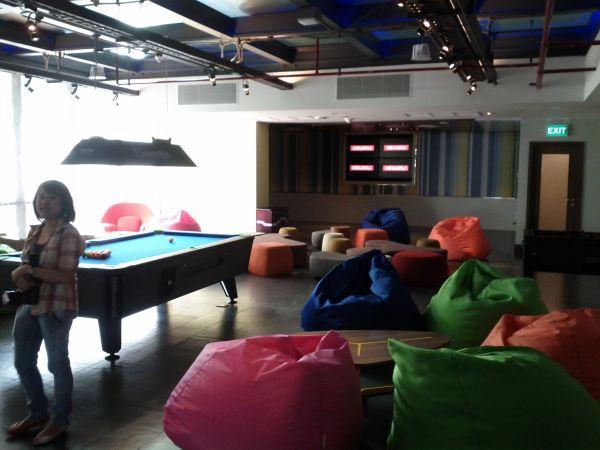 Get 20% Discount For Buying SPG Starpoints – Capped at 20K Starpoints per Calendar Year. 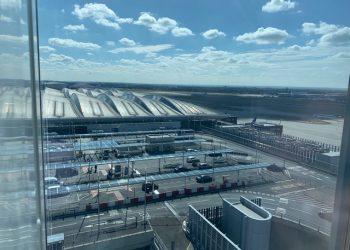