American Airlines (AA), whose parent AMR is currently in chapter 11 bankruptcy protection, just sent an email blast regarding their latest offer for double elite qualifying miles (DEQM). They have been running a limited DEQM promotion for residents of IL and CA for flights between LAX/SFO and ORD. Now all the AA flights marketed and operated by AA and American Eagle are eligible for DEQM until January 31st, 2012. Unlike previous promos, there is no need to reticket. All the flights are eligible. You just need to register for the promotion. 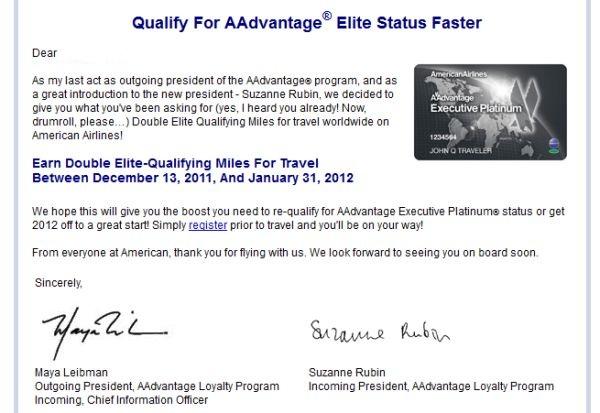 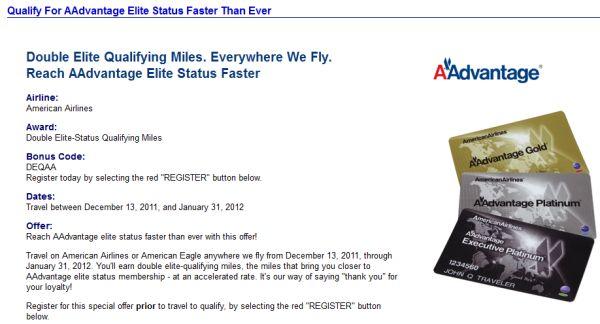 Examples how this promotion works:

Terms and Conditions:
AAdvantage promotion is valid for all travel on purchased, published fare tickets on American Airlines or American Eagle marketed and operated flights from December 13, 2011, through January 31, 2012. This offer does not require travel to be booked during a specific time frame; travel booked prior to the start date of this promotion is eligible. Offer applies to all eligible segments flown, regardless of the type of trip, i.e. one-way, round-trip, circle trip or trips including open jaws. Bonus elite qualifying miles earned in conjunction with flight activity during 2011 will count towards your 2012 membership year; bonus elite qualifying miles earned in conjunction with flight activity during 2012 will count toward your 2013 membership year. This offer does not increment the member’s prize eligible mileage balance, elite qualifying points or segments. Double elite-qualifying miles will be calculated at 100% of the base miles earned. Double elite qualifying miles will be posted to the account of the traveling AAdvantage member within 6-8 weeks after qualifying activity posts to your account. Promotion does not apply to travel on mileage award tickets or fares that are ineligible for AAdvantage mileage accrual. Flights operated by our codeshare partners or oneworld alliance carriers are not eligible for this promotion. This offer can be combined with other AAdvantage promotions. Registration prior to travel is required. 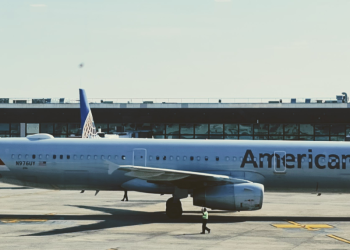