I have a confession to make. I really don’t fly Southwest that often, maybe once a year or once every two years or so. They are, however, very good airline, but just doesn’t fit my travel patterns that well. I have been their Rapid Rewards members since early 2000.

Where Southwest excels are those short and medium haul flights. As they don’t belong to any alliance, there is no way to use Raid Rewards for award travel in international premium class cabins on quality carriers, that is my favorite way of burning earned miles/points.

Apparently, Southwest feels that they need to react based on the AA’s recent offer of Double Elite Qualifying Miles on all routes until the end of January.

For a limited-time only, you can earn double Tier Qualifying Points on every Southwest flight you take!  Simply register, book, and travel by January 31, 2012, and you’ll be on your way to A-List Status (or A-List Preferred if you’ve already qualified for A-List) in double the time!

To take advantage of this offer, simply follow these steps:

As you can note from the terms and conditions, this offer only applies to A-List or A-List Preferred status. These do NOT apply to Companion Pass qualification. Also, the number of flight segments is not doubled. Only the number of points earned per dollar spent on different fare classes is doubled. You can register for this offer at www.southwest.com/rapidrewards/promotion?f=225dojup.

During the promotional period one needs to spend $5833 on the cheapest Wanna Get Away fares, $3500 in Anytime fares, or $2961 in Business Select fares to get the A-List status. You need to double the money spend during the period to qualify for the A-List Preferred status. 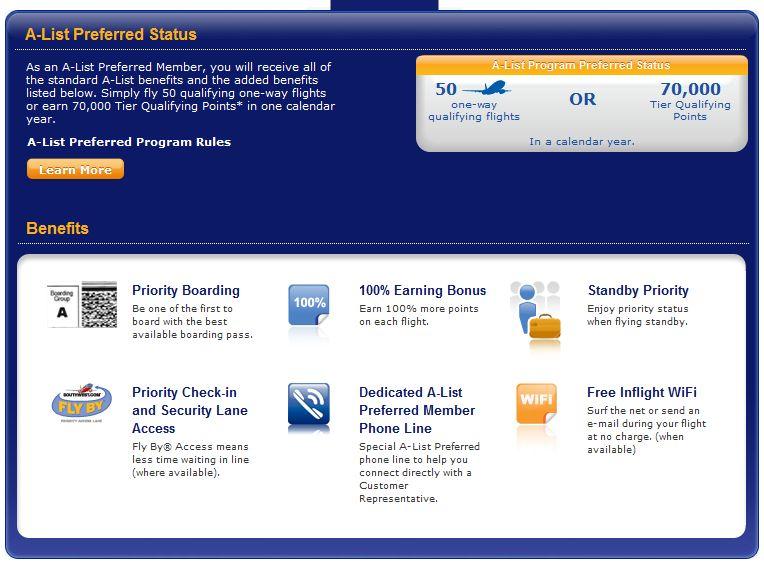 Southwest Airlines Buy & Gift Rapid Rewards Points Up To 75% Bonus Through May 28, 2021