On my last trip to Koh Samui in late November, I checked out the brand new Conrad Koh Samui Resort, and decided to spend a night at the newly reflagged Le Meridien as well. This property was first introduced as Langham Place and then reflagged by the owner to Gurich. After a year, they decided to brand it under the Le Meridien.  So, don’t get confused, if some still refer this hotel as Langham or Gurich, as it has changed names three times in just two years!

The location of the hotel is in Lamai beach. It is about 20 to 30 minutes from the airport by a car depending on the traffic. Most of the flights in and out of the island are on Bangkok Airways as they own the airport. There are two daily flights from Bangkok on Thai Airways. There is a direct flight from Singapore on SilkAir. Bangkok Airways also operates some international routes from Koh Samui (USM). You can get a resort to pick you up from the airport or arrange a taxi on the spot. Taxis on Koh Samui should theoretically use meters but they don’t. You need to negotiate a fare with the driver beforehand. Oneway from the airport to the resort should cost 500 to 1000 THB depending on your negotiation skills. 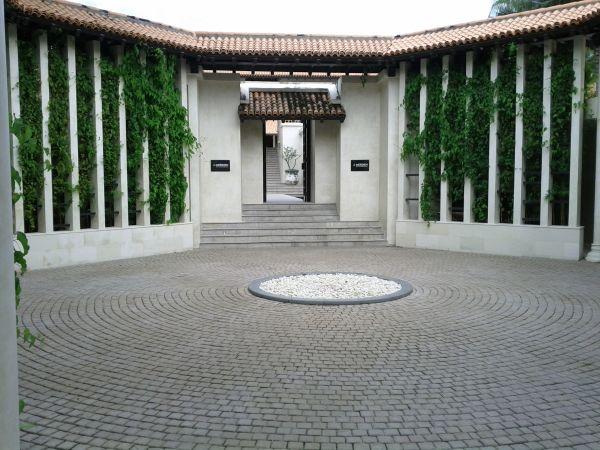 Friend of mine, who works on the island, picked me up from the Conrad and dropped me off at the Le Meridien.  If you are driving yourself, you just need to pay some attention or the entrance to the hotel is easy to miss from the road. You need to leave your car outside, and then you will be taken to the entrance by a cart or you can just walk.

Not entirely sure what is the usual SPG Platinum upgrade here. I was first upgraded to a Plunge Pool suite. I had a rather longish conversation with one of the managers there who further upgraded my paid reservation to a Pool Villa, which was not available immediately. Used the Plunge Pool Suite for couple of hours until the other one became available.

The setup of this Plunge Pool Suite is somewhat weird, and I wouldn’t necessarily call it a suite. It has an indoor terrace with a sofa that is not air-conditioned. If you leave the indoor door open, you can keep it cool enough to spend some time there. Then the only air-conditioned part is the bedroom that is not that big. The shower area, bathroom, vanity, and the plunge pool in the inner courtyard of some sort that is not air conditioned and is open. 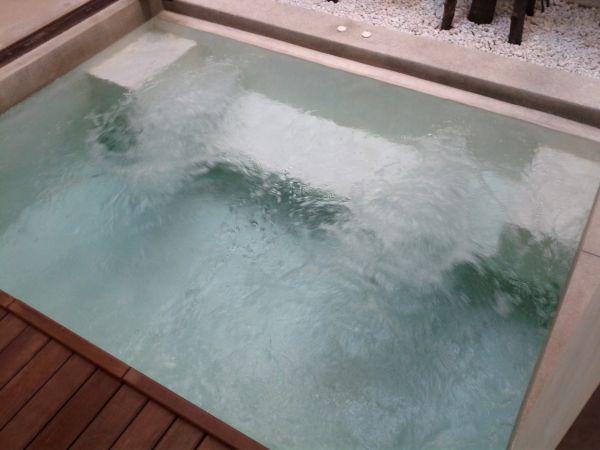 The Pool Suite was much more spacious. There was no outdoor terrace right in the front, but rather large courtyard where the pool and the sitting area were both located. Also the bathtub, shower, and the restroom were outside. There was also couple of sun chairs by the pool as well.

Not sure, if the Platinum’s get a complimentary breakfast or not, because the rate, that I booked, included one. It was rather usual affair. You could order egg dishes i.e. eggs benedict that were made at the eggs station. All other breakfast items were in the buffet. I went to the breakfast quite late and some of the buffet options were rather parse at the time. Probably a good idea not to leave it to the last minute. 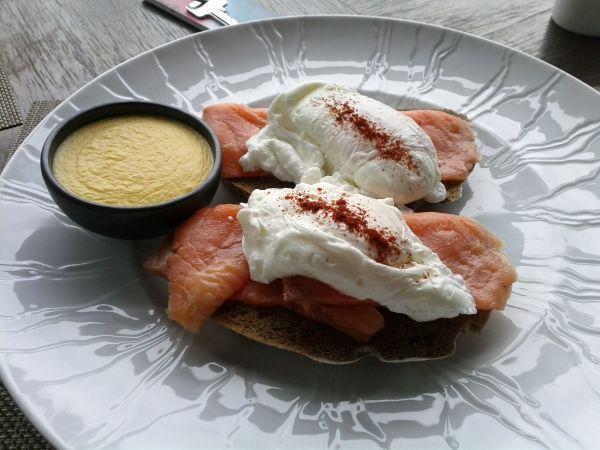 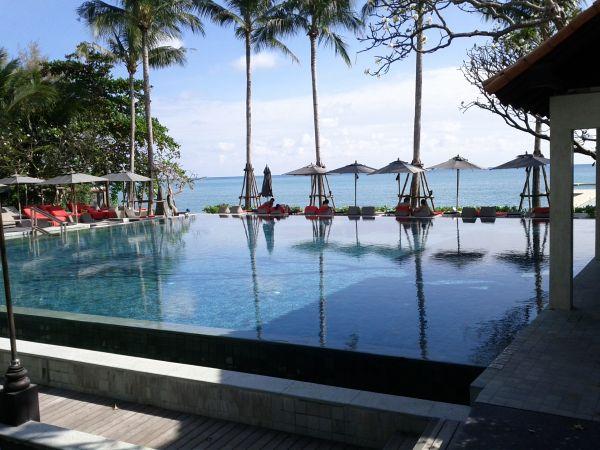 The resort has a nice pool and quite a few sun chairs spread around the pool area. Overall, I would say that this is more of an adult type pool area. I been to the Lamai area before and stayed at the Renaissance hotel, which is within a walking distance through the beach. This time in November, however, the tide was high, and walking through the beach to the Beach Republic next door or to the Lamai’s central bar area would have been impossible. The area around the hotel is lively and there are quite a few options to eat and drink. You are not confined just to the food and beverage outlets at the hotel.

It was on the ground floor close to the lobby. Unfortunately, I didn’t have time to exercise but had a quick look. It was not the most modern, but had the usual cardio equipment and some weights.

The best way to move around the island is to rent a motorbike. Wouldn’t suggest this if you haven’t used one before as the traffic can be rather chaotic at times. The daily rental fee is around 150 to 200 THB. Other option is to rent a car or to use a taxi. Taxis in the western sense are not expensive but if you have used to metered ones in Bangkok the taxis in Koh Samui are about triple the price. The entertainment district of Chaweng is about 20 minutes from the hotel. Most of the nightlife is in this area.

Every evening at 19:19 they have this lantern release performance in the lobby courtyard. You can lighten it up and once filled with warm air, release it to the sky.

This resort very well fits the French “chic” Le Meridien brand. The resort itself is rather small – less than 80 rooms. The location is great. The craziness of Chaweng is within a short drive yet the Lamai beach area isn’t dead either.

There were some mosquitoes around because I had few bites on the legs and arms in the morning. If you are sensitive to mosquitoes, it might make sense to use a mosquito net.

The official star classification of this property is probably five star. I would give it four and a half.

Last Chance to Use The Continental Elite Maximizer to Get the Last United Airlines and Continental EQM’s in For the Year.