Back in December, I was on my way from the newly opened Park Hyatt Abu Dhabi Saadiyat Island, of which I have also written a review, back to Dubai. I decided to stop on my way for a night at the Westin Abu Dhabi Gold Resort & Spa, which had just opened in November. It also helped that I had one free resort night award left that was about to expire. I had planned to use it at the St Regis Saadiyat Island, but the opening of that hotel had been delayed until the end of December. The Westin is about half way between the city and the airport.

There was still some construction going on at the Westin, although you could hardly tell that. They didn’t have any suites ready yet so the Platinum upgrade was to a ground floor room with a direct access to the golf course and sitting area outside. The room was very high and quite nice. The fitness center was not ready but hotel guests were offered a ride using a buggy to another nearby one. The main deeper pool was still being constructed when I was there. All these have probably been completed by now, or will be shortly.

The check in was surprisingly painless considering that it was a brand new hotel.  The occupancy was probably rather low, that is typical for a recently opened hotel. The Starwood Preferred Guest (SPG) Platinum status was noted and, after I inquired about the suite upgrades, was told about the still ongoing construction. The check in desk was manned with quite a few employees that were from the former Eastern Bloc countries based on their accents. The check in experience, however, was very good. 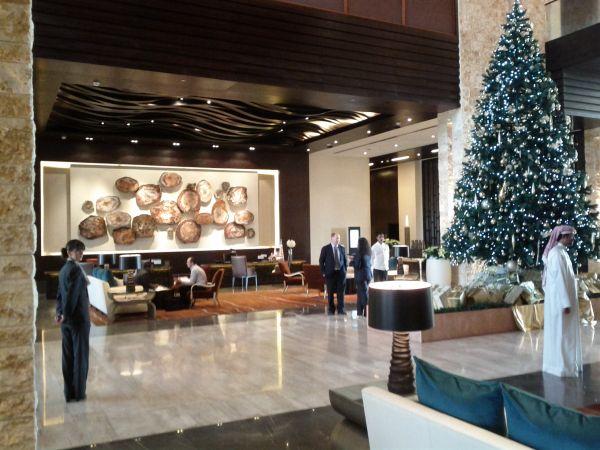 This was one of the few occasions in 2011 when Starwood property didn’t give me a Platinum suite upgrade, but I well understood the reason. The room itself had high ceilings that made it feel more spacious than it was.

The room itself was very functional but I didn’t quite like the air-conditioning control panel. It took me a while to find out how to turn it off altogether. This was mid-December so there was no need for the AC in the evening, and quite frankly I didn’t like the way it was blowing right to the bed. The bed was heavenly as one would expect from Westin. The bathroom was spacious and liked the darkish color scheme. 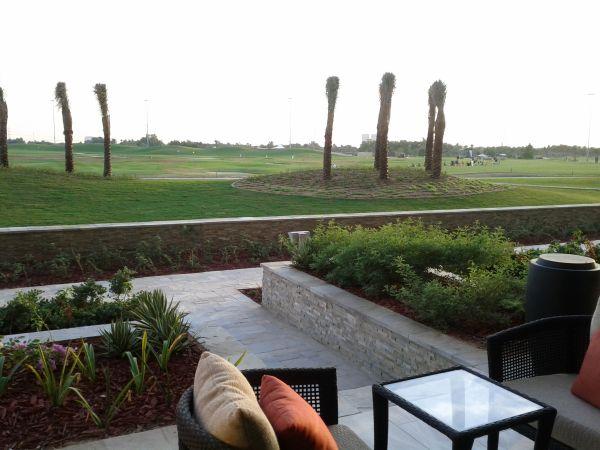 The good thing of being on the ground floor was the sitting area outside that opened to the golf course. You could just sit down and watch people on the golf course.  This also made the room to feel bit bigger than it really was.

Lemon & Lime and The Lounge 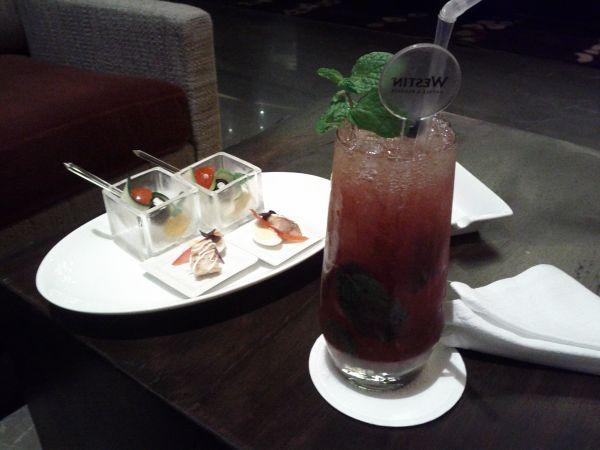 Lemon & Lime is basically the lobby bar. Platinum members have their cocktail happy hour where the selected drinks on the menu were complimentary from 6PM to 8PM. They offered some small snack items with the drinks as well. I have to say that the cocktails offered like Russian Marry, Berry Mojito, and sparkling wine based ones were rather innovative, and I was somewhat surprised that they were on the happy hour menu.

The Lounge is more like a café where one can buy some bakery items, sandwiches, salads, cakes etc. and eat them on the spot. Later in the evening I wanted to take something to go and found out that all the bakery ones were half off.

This was comped for Platinum members. It was at their international restaurant called Fairways. The breakfast spread was rather impressive and of good quality. My eggs benedict was another story though.

The fitness center was not ready when I was there so cannot comment about it. The pool area looked very nice, although they were still working on the deeper pool. It should, however, be completed by now. There were plenty of sun chairs around and the pool bar looked very inviting but unfortunately I didn’t have time for an adult beverage.

Overall this was a very nice short stay. This is one of the better Westin’s that I have been to. It was nice to see that the day to day operations were already running smoothly when they had only been open for couple of weeks when I was there.

You will love the hotel if you are just planning to play golf or spend time by the pool. The hotel is also convenient if flying out early in the morning out of Abu Dhabi airport. It is not the most convenient hotel for sightseeing in the city center of Abu Dhabi, however