IHG Priority Club just announced their latest promo that is valid from January 23rd to April 30th, 2012. You can get double points or miles starting from your second stay. You can start earning from your first stay if you stay at Candlewood or Staybridge Suites. 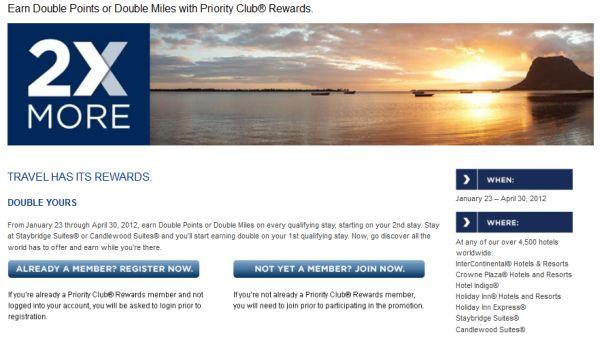 Please note that you can combine this with the promotion that I wrote about on December 16th for 5K/10K/15K Priority Club points for 3/7/15 nights.

This promotion doubles the number of base points/miles you can earn from your stay that is dependent of the brand.  During the promotion period you will earn 20 Priority Club points per USD at Crowne Plaza, Holiday Inn, Holiday Inn Express, and Hotel Indigo’s, and 10 points per USD at Candlewood and Staybridge Suites. For InterContinental hotels, it means another 2000 Priority Club points per stay regardless how many nights you stay or how much you spend is during the stay.

Please note that the number of base miles earned depends of the airline. You can check the various airlines and the number of miles earned per USD spend here: http://www.ichotelsgroup.com/h/d/pc/1/en/c/2/content/dec/pc/0/en/miles/us/airline.html.

You can register for this promotion at https://secure.priorityclub.com/hotels/us/en/global/offers/q112/pts_mls.

The participating airline partners for this promotion are: