Couple of months ago a friend of mine living in Finland was telling me about this Groupon deal.  For a set fee you would fly for “free”, and only have to pay for the taxes/fee associated with the ticket. At that time, I didn’t pay too much attention to the offer, because I was outside of Europe and the deal only applied to flights within Europe. The deal resurfaced again the other night, and I decided to have a look at it. 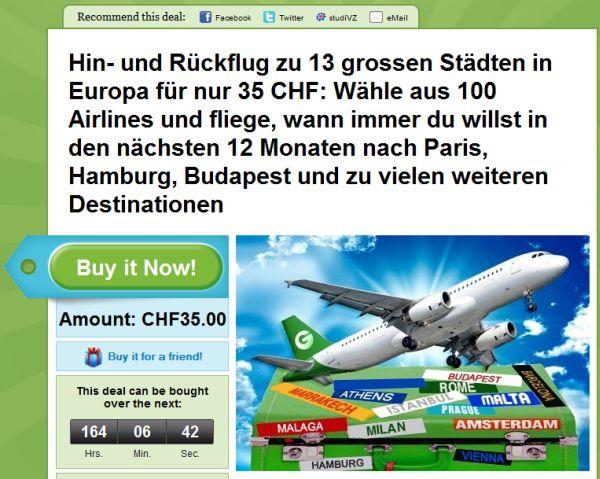 Please note that the offer page is in German, but the deal is open for anyone. If your German is less than perfect, you can always use Google Translate to translate the page to your preferred language. The deal is that you only pay 35 CHF ($38) and you can fly to/from Zurich to the following destinations; Budapest, Dusseldorf, Nice, Venice, Hamburg, Munich, Bucharest, Brussels, Frankfurt, Paris, Edinburgh, Helsinki, and Florence. But, the voucher is not valid just between these cities. It appears to work on most routes within Europe.

The key is that you need to book the ticker at least 7 days in advance. The major drawback is that not only you need to pay the real taxes but also the “fake” fuel surcharges that most of the airlines file with the tax component marked as YQ/YR.

If you are planning to buy one or more of these coupons, do yourself a favor and check the flight availability and pricing using http://www.airfasttickets.ch/groupon.ch/. Remember to compare with sites like Expedia.com.

– If they cannot find low base, the engine won’t return any choices

– Some of the booked fare classes would be non-earning ones in frequent flyer programs, but that is not unexpected for relatively inexpensive flights within Europe

– They try to skew lot of bookings to Air France-KLM probably because of the way they publish most fares i.e. low base but high YQ/YR

– You need to use lot of time, if you are planning to score a deal using these Grouopn vouchers and then you probably won’t find one

Here are five actual examples I did.

Then I decided to check another day. Flying out on 8th of March and returning on 21st. This time airfasttickets.ch returned quite a few choices.

The taxes/fees (mainly fuel surcharges) would be 332.03 euros.

The Expedia couldn’t replicate exactly the same itinerary, but I believe that the fare base is the same. As you can see the base fare is only $42.

2. Stockholm to Athens on 9th of February and returning on 16th 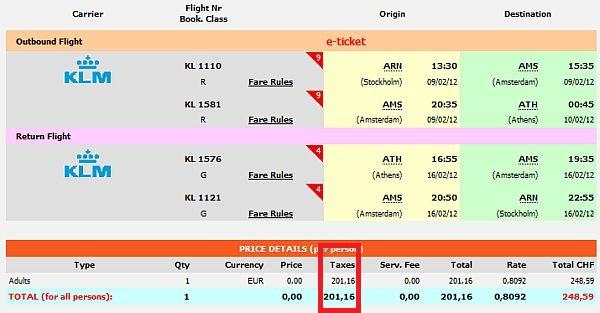 Expedia’s price is practically the same as the Airfasttickets.ch’s taxes/fees alone.

3. London Heathrow to Larnaca on April 8th returning on 15th.

Airfasttickets.ch returned that nothing was available.

Plenty of options available on Expedia. I guess that they couldn’t find a fare with a low enough base to make money on their coupon deal. 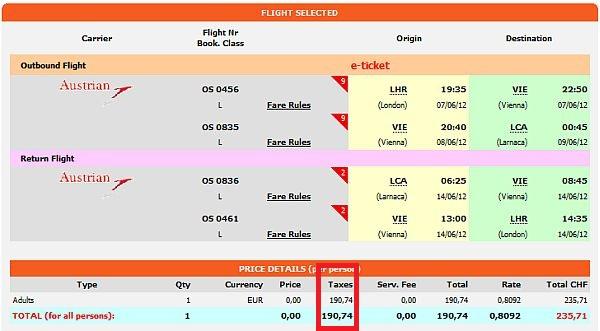 Expedia for the same itinerary.

Expedia shows quite a few different options on various airlines.

Airfasttickets.ch only returns options on Air France. The Air France option is far cheaper using Airfasttickets.ch, but would require an overnight in Paris, and an airport change on the way back. Also, the price is about the same considering the price of the voucher purchase than the lowest commercial fare on Brussels Airlines.

5. Budapest to Amsterdam on August 15th and return on 20th.

Expedia did have rather reasonable priced KLM flights for $196 all inclusive.