It hasn’t been a great week for Oneworld alliance. Friday the Hungarian carrier Malev ceased operations when planes where held at various airports for unpaid debts. And now Kingfisher’s joining to Oneworld is put on hold.

Kingfisher was set to join the alliance on February 10th, but now the implementation has been put on hold as the carrier tries to resolve its financial difficulties. Earlier in the week Kingfisher failed to pay its dues to IATA’s Geneva based ICH clearing house, which airlines use to settle payments with each other, and its clearing house membership was then suspended.

It remains to be seen, whether Kingfisher is able to resolve the financial difficulties. The airline would need a significant capital boos/debt reduction in order to survive. Air India was set to join competing Star Alliance, but its pending membership was suspended August last year. There are currently no Indian carriers in any of the three global alliances. 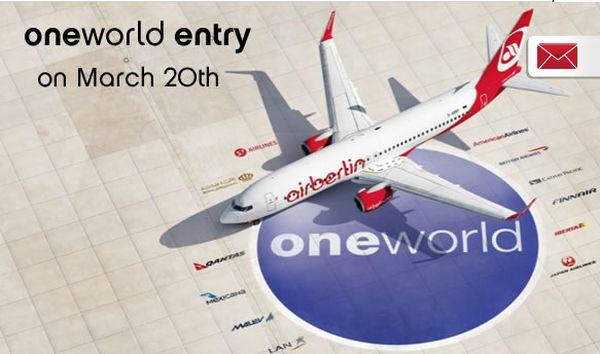 One the positive side for the Oneworld alliance is the confirmed joining date of March 20th for Air Berlin. From that date onwards you can earn both elite qualifying status miles as well as redeemable miles on flights operated by Air Berlin but credited to Oneworld Alliance partners.

Be sure to check whether the ticketed fare class qualifies for a credit as it often varies between the alliance carriers. On American Airlines’ AAdvantage program the cheaper fares only earn 25%. Not sure if American Airlines will implement a new earnings chat from March 20th onwards.

I haven’t flown Air Berlin yet, but they have come across on fare searches quire frequently. It is just difficult to book on a non-alliance carrier when you will miss all the benefits associated with the status i.e. lounge access and higher luggage allowance.