American Airlines is apparently trying to win more business by sending targeted offers for double redeemable miles and accelerated qualification for Platinum or Executive Platinum status. This is not surprising considering that the airline is going through the chapter 11 bankruptcy reorganization process. 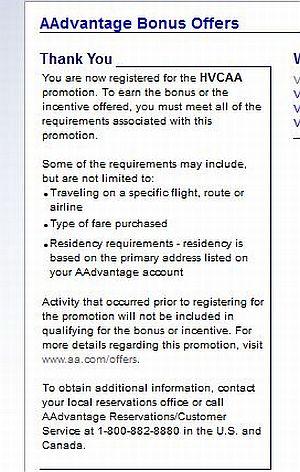 A FlyerTalk member kwysocki posted a copy of an email received from American Airlines regarding this:

At American Airlines, we value your business and want to see more
of you. That’s why we’re offering two exciting promotions, exclusively for you.

First, you can earn double American Airlines AAdvantage® miles on all purchased, published fares for travel on American Airlines, American Eagle or the AmericanConnection® carrier between February 8, 2012 and
May 31, 2012.

Second, we’re offering you the opportunity to qualify for AAdvantage Platinum® or even AAdvantage Executive Platinum® status at an accelerated rate.

Between February 8, 2012 and May 31, 2012, simply fly the required number of base miles as outlined below on American Airlines, American Eagle or the AmericanConnection carrier. Elite-status membership earned through this special promotion will be valid through February 28, 2013.

We know you’ll appreciate the unique privileges of AAdvantage Platinum or AAdvantage Executive Platinum status, including:

Simply click the button below to login and register for this promotion using the Promotion Code HVCAA prior to travel and by 11:59pm CT on February 29, 2012.

This is an exclusive offer only for members who receive this email from American Airlines and register online
to participate.

Although it is rather unlikely that you would get the double miles and the offer of getting EXP for 25K EQM during the promotional period, it never hurts to register and see what happens. Especially, if you already have flights coming during the period. You can sign up at http://www.aa.com/offers by using the HVCAA promotional code and you American Airlines AAdvantage number. The system will confirm your registration, but it doesn’t guarantee that you would get the benefits if you were not targeted.