American Airlines has extended the promotion of double elite and redeemable miles between ORD/DFW-SFO/LAX/SNA cities from March 30th to all the way up June 30th, 2012. This must be the longest double miles promotion in AA’s history. 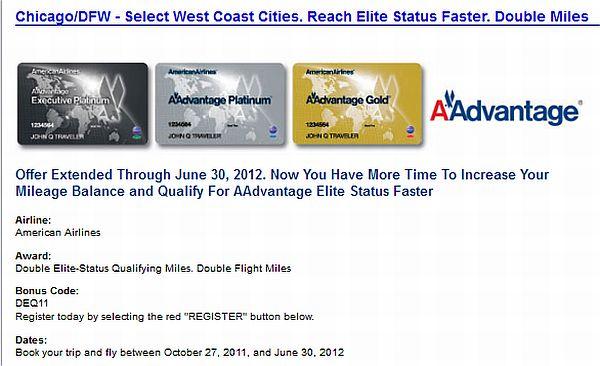 Originally Orange County airport (SNA) wasn’t part of the promotion, but from March 9 this offer has also applied to flights between ORD-SNA. On an email received from American they did mention that the offer would be valid for flights between DFW-SNA, but that doesn’t appear on the official promotion page on AA.com. 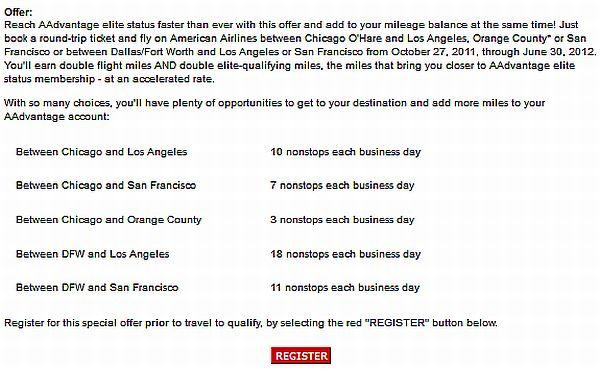 Note that your address on file with AAdvantage program needs to be in TX, IL, or CA to be eligible for this offer. If you don’t live in these states, just ask your friend. And,yes, you do need to register as well.

Here are the full Terms and conditions of this offer:

Terms and Conditions:
Offer only applies to AAdvantage members with an address on file with AAdvantage Marketing Programs in California, Illinois or Texas. AAdvantage promotion is valid for round-trip travel on purchased, published fare tickets on American Airlines marketed and operated nonstop flights between Chicago (ORD) or Dallas/Fort Worth (DFW) and Los Angeles (LAX) or San Francisco (SFO) from October 27, 2011 through June 30, 2012; between Chicago (ORD) and Orange County (SNA) from March 9, 2012 through June 30, 2012. A round trip is defined as two one-way trips booked in a single reservation under one ticket number. Reservations containing open jaws are eligible. A maximum of one round trip is permitted per reservation. Reservation must be booked on or after October 27, 2011, to be eligible (travel between Chicago O’Hare and Orange County must be booked on or after March 9, 2012 to be eligible). Bonus elite qualifying miles earned in conjunction with flight activity during 2011 will count towards your 2012 membership year; bonus elite qualifying miles earned in conjunction with flight activity during 2012 will count toward your 2013 membership year. This offer does not increment the member’s elite qualifying points or segments. Double elite-qualifying miles and double flight miles will be calculated at 100% of the base miles earned for the flights between Chicago or DFW and Los Angeles between Chicago or DFW and San Francisco or between Chicago and Orange County only. Promotional miles associated with this offer will be posted to the account of the traveling AAdvantage member within 6-8 weeks after qualifying activity posts to your account. Promotion does not apply to travel on mileage award tickets or fares that are ineligible for AAdvantage mileage accrual. Flights operated by our codeshare partners or oneworld alliance carriers are not eligible for this promotion. This offer can be combined with other AAdvantage promotions. Registration prior to travel is required.