Here is an example based on my six IHG stays of this year. Two of the stays were at the Crowne Plaza hotels (one night each) and the four at InterContinental’s. Two of my four IC stays were for two nights.

The number of base points earned is 9684 and points from Platinum/Royal Ambassador and other bonuses 40194. I would also need to factor in the prorated Ambassador Accelerator bonus of 20000 points for 15 IC nights. That would be additional 8000 bonus points. So, 9684 base points and 48194 bonus points and average of 7234 points per night. This is rather typical for Priority Club.

Of course the points are then best used for Point Breaks.  If you play the game right, it is basically pay for one & get one for free. 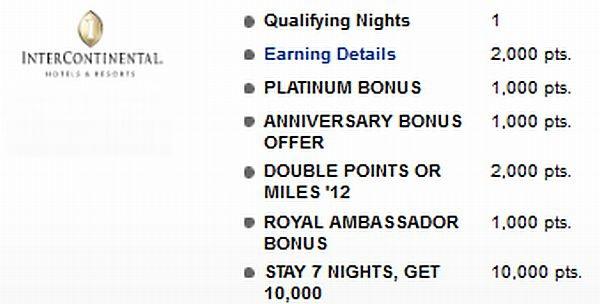