American has currently so many different bonus offers going on that it is difficult to keep track all of them. Their latest offer is for bonus miles on round-trip travel on non-stop Qantas flights between United States and Australia from April 19th to June 30th, 2012. The promo code for this offer is QF20K.

The bonus is dependent of the class of service purchased. The only excluded fare classes are N and Q on both American and Qantas marketed flight numbers. This offer is also valid on Qantas flights ticketed under American Airlines codeshare numbers. 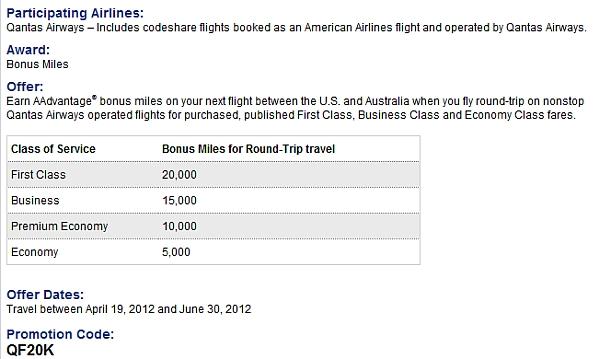 Remember. You need to register for this offer.

AAdvantage bonus mileage offer is valid for round-trip travel on nonstop Qantas Airways operated flights between the U.S. and Australia from April 19, 2012 – June 30, 2012. Includes travel on codeshare flights marketed by American Airlines. This promotion is only valid for AAdvantage members who purchase and fly on published fare tickets that are eligible to earn AAdvantage miles. Excludes fares beginning with N or Q on American Airlines marketed, and Qantas Airways marketed and operated flights

Airfare of the Day [Business Class] AMERICAN AIRLINES Amsterdam to Los Angeles from 1,458€