Why I (Sometimes) Love United Mileage Plus

I had a dilemma today earlier today. I was in Sharjah and needed to get to Bangkok for couple of nights, and then to Ho Chi Minh City until Friday next week. The weekend of 11th to 14th of May I was going to be in Hong Kong. I had already arranged an award using BMI Diamond Club miles to take me from Hong Kong to Manila via Bangkok and Singapore. This was bit out of the way, but decided to have a refresher on TG’s and SQ’s F products on HKG-BKK and SIN-MNL segments.

To make things worse I had to find a way out of Manila as well. Due to some regulations in Philippines most of the travel sites are not selling or issuing award tickets originating from Philippines. Filipinos are required to pay some sort of special departure tax that doesn’t apply for foreigners.

The beauty of United’s return awards are that they allow both a stopover and open jaws at both ends i.e. I can fly from Bangkok to Ho Chi Minh City and consider it a stopover on my way to Hong Kong. I can then return from Manila to Jakarta. These countries are all in the same zone.

But first, I needed to get to Bangkok. It didn’t make any sense to redeem out from UAE. Gulf Air had an excellent economy fare (yes – horrors). Booked it today around noon for flying out the same evening. Fare was only $308. This would also earn me around 4000 American Airlines AAdvantage miles.

So back to the United awards reservation, I plugged in the dates that didn’t have much flexibility; BKK-SGN, SGN-HKG and MNL-CGK.  I love the fact that you can mix and match flights from all Star Alliance carriers service Asia and United partner airlines as well.

Ho Chi Ming to Hong Kong would have had a direct United flight available as well but only in economy. Decided to make a detour via Bangkok.

The United is very good at suggesting routings that are somewhat out of the way. For the oneway from Manila to Jakarta I decided to go via Seoul and Bangkok. There would have been an option for taking this on Singapore Airlines F class as well, but decided that it wasn’t worth the extra miles United would have required. Also, there was lots of options for mixed cabin flights. The only problem is that United charges for the highest cabin.

The best part of these awards is the taxes that United collects. There are no fuel surcharges or other funny extras to pay. This whole award was only 35K United miles + $49.40.

My advice would be to consider return awards as well as they offer a stopover and two open jaws. Essentially you can create an itinerary that is close to three one ways for the price of one return award ticket.

Unlike the formed United the new one takes couple of hours to email the eticket receipt. All was in order, however. I much prefer doing these online without human interaction. 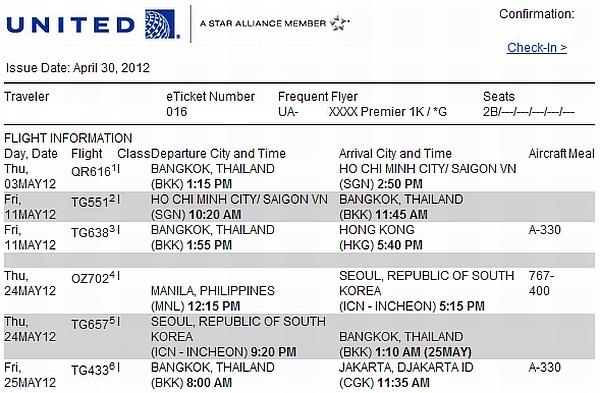