Yesterday, I wrote about the upcoming sequel to the last years Radisson Big Night Giveaway. This time, however, they are running a similar promotion with all of their three different brands, and according to their social media representative, you can sign up for all of them. (Hope that Dana is right!)

So, if you manage to swing by and stay a night at each of these three different brands during the promotional period, you should earn 138000 Club Carlson bonus points. Highest category award nights require 50000 Club Carlson points per night, although redemptions start at 9000 points. 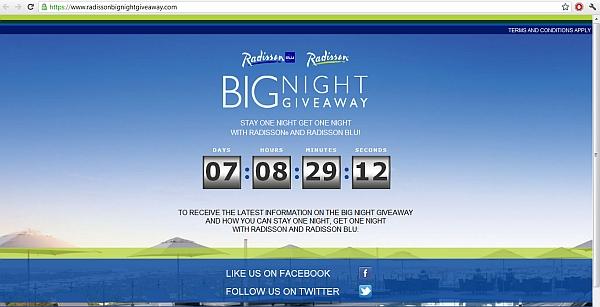 And yet another one for Park Inn properties for 44000 Club Carlson points for a stay.

The link for this specific website doesn’t seem to be up yet.

The Big Night Giveaway Promotion (“Promotion”) is available only to Club Carlson members. To be eligible for the Promotion, members must register online for the Promotion at http://www.radissonbignightgiveaway.com (“Promotion Registration”), provide their Club Carlson member number at the time of reservation or check-in of the Qualifying Stay, and then complete one Qualifying Stay at any Radisson or Radisson Blu hotel worldwide (“Participating Hotels”). Guest must check in for the Qualifying Stay on or after May 15, 2012 and check out must be completed no later than July 15, 2012 (“Promotion Period”). A “Qualifying Stay” is defined as a stay of one or more consecutive nights in the same room at a Participating Hotel regardless of the number of check-ins or check-outs on a rate for which Gold Points are awarded in accordance with the Club Carlson Program Terms and Conditions.