Priority Club has launched their summer promotion first exclusively on Facebook. Officially the promotion starts on June 1st, but you can get in now, if you like Priority Club first and then fill out the form on Priority Club’s Facebook page. 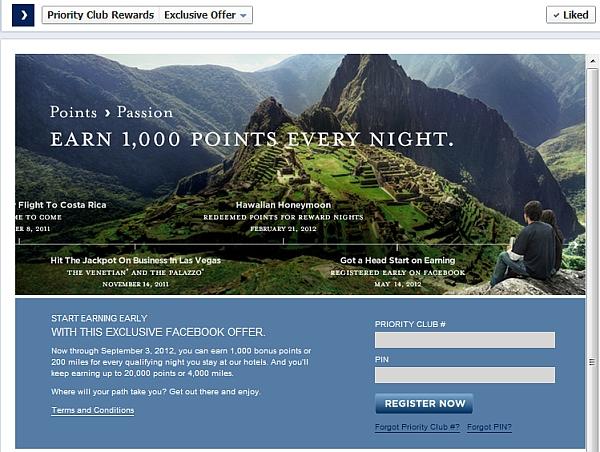 The promotion is very simple. You will earn 1000 bonus Priority Club points per night until September 3rd, 2012. The maximum number of points that you can earn is capped at 20000. There is also the airline option, but I would not recommend choosing it. Once you register on Priority Club’s Facebook application, you should then receive a separate email confirmation in two business days.

Please note that you can combine this offer with numerous other Priority Club promotions like these six, current stay bonuses & some bonuses for InterContinental stays.

Here are the Terms and conditions of this offer:

You must be a miles collector with a preferred alliance to collect airline miles. See below for participating airlines. Frequency/partner credits may be issued in currencies other than miles. All airline program terms and conditions apply. For details on airline miles earning structure, click here. For details on points earning structure, click here. Only one room per member per night at participating hotels will be awarded the applicable bonus. No retroactive bonus points or miles will be awarded for nights prior to registration. Subject to standard Priority Club Rewards Membership Terms and Conditions.

This promotion is in no way sponsored, associated with, endorsed or administered by Facebook. You understand that you are providing your information to InterContinental Hotels Group and not to Facebook.