Radisson had a similar promotion at the end of last year. It must have been a very popular for them as it returned for the 2012 as well.

All you need to do is to watch a short promotional video after which you can register for the promotion. If you don’t have a Club Carlson account yet, you should open one using the eRewards promo (4500 bonus points but might have expired) or using another link (2000 bonus points).

After the registration you need to have one paid stay at any Radisson or Radisson Blu property worldwide by July 15th, 2012 and you will be then granted 50000 Club Carlson bonus points. This is in addition to the usual points that you will earn from the stay.

This promotion is available for the first 100000 registrants. Last year, they didn’t close the registration. Not sure how they are going to handle it this time around. If you are planning to do a Radisson stay during the promotional period, you probably should register now. 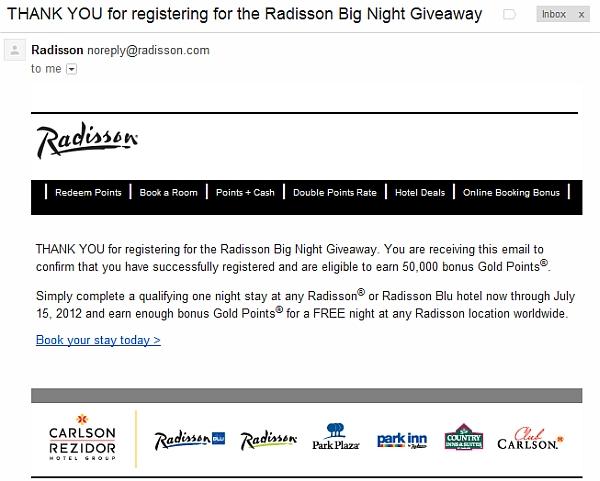 You will receive an email confirmation after successful registration for this promotion. If you have status with a competing chain, Club Carlson can also match it. I wrote about how to do a Club Carlson status match couple of days ago.

Here is How it Works: