I have been to Doha few times in the past when flying on Qatar Airways. The city is an easy stop for a longish transfer of less than 24 hours or for a short stopover. Normally there are only a handful of people at the luggage claim as most of the passengers are on transit. The immigration has always been a breeze. Airport is close to the city center and the taxi fares are cheap

It is not the most exciting city in the Middle East, but there is enough to do for a couple of days.

I have checked out the W, InterContinental (old one), and the Sheraton hotels on my previous trips. There are new hotels popping up almost every few weeks and decided to try something else this time around. The headline prices for hotels in Doha seem to start at $200++.

When there isn’t a stellar promotion around, I tend to check both the paid options and award options for quite a few chains. Preferably, I would have liked to have a stay at any of the three Club Carlson brands that are giving away points enough for a free night (see the promotions here, here, and here). Unfortunately there are no Club Carlson properties in Doha.

So, I decided to check Hilton, Hyatt, InterContinental Hotels Group, Marriott, Starwood, and Wyndham options for Doha and eventually settled for Points & Money option with the Hilton.

There was four options for Hilton; pay 820 QAR, use 40K HH points, Points & Money option of 20K HH and 254 QAR, or use the last free night certificate from the Hilton’s promo last year.

The Grand Hyatt in Doha is located close to the sports world complex and now burned Villagio mall. The location is horrible if you are planning to do sightseeing in Doha.

With Hyatt there are basically two options, pay the 1000 QAR or use 15K Hyatt Gold Passport points. There is a nice promotion going on with the Hyatt for the airline points, but not worth paying the premium for this hotel, however.

There are two InterContinental hotels in Doha. The old one, where I have stayed at previously, and the new one that is located in the city center, and is very close to the nice City Center mall.

Both were in the 900 QAR range and would require 40K PC for the old and 30K PC for the new one. Hotels had points and money option available as well.

To my surprise Marriott had the greatest number of properties in Doha and they would have been the best deal using points. 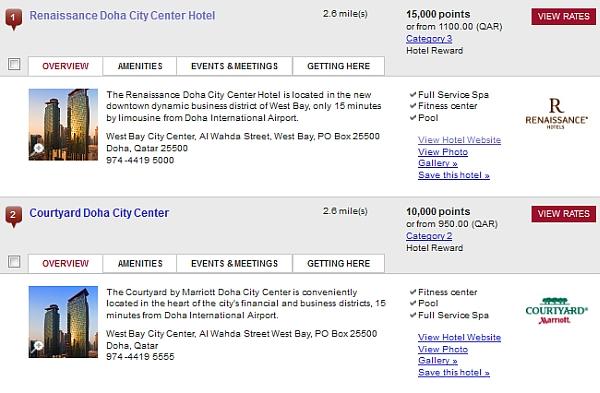 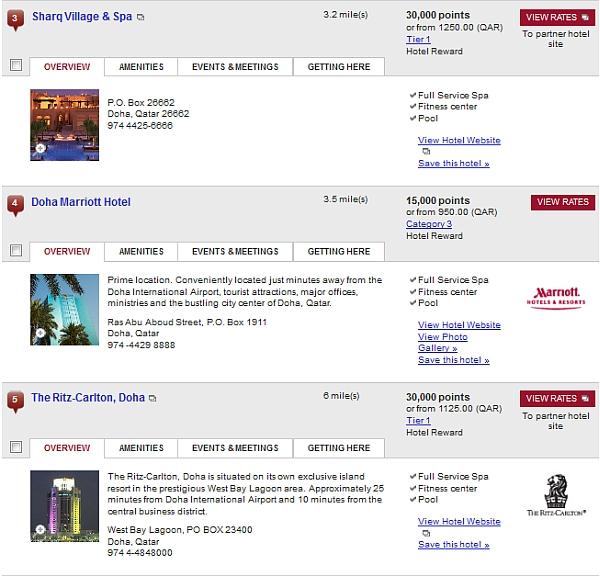 The Renaissance and Courtyard hotels are both collocated at the City Center mall that I was referring earlier. You have direct access, at least from the Courtyard, to the mall itself. The number of points require for the Renaissance is 15K and for the Courtyard 10K. I think that both of these present exceptional point redemption value. Then there is the older Marriott that is located close to the airport. It also requires rather modest number of points (15K) considering the going rates of 950 QAR at this hotel.

There are three Starwood properties in Doha, and I have previously stayed at the W hotel right after it opened few years ago and at the Sheraton Doha Resort late last fall. I like the location of both of these hotels. There is a brand new St Regis in Doha as well, but the location of that hotel is disadvantageous.

The Sheraton Doha Resort (category 6) is absolutely horrible value point wise. It would require 20K SPG and didn’t have any cash & points available.

The W is category 5 hotel and would have had a price tag of 999 QAR for last night. The number of SPG points required for a free night would have been somewhat reasonable 12K, but the Cash & Points at 4800 points + 90 USD for the night is a great deal for Doha.

The St Regis had the highest price at 1400 QAR and category 6 award level. Neither 20K SPG or 8K SPG + 150 USD would had represented any value for me.

I haven’t stayed too much at the Wyndham family for hotels. Last time when I stayed at the Ramada in Colombo, I later found out that I would not earn any points. This was not clearly presented on the website, but was rather hidden in the terms and conditions of the rewards program. You won’t earn any points for stays in Sri Lanka and number of other countries.

Wyndham family would have had three options in Doha; two Ramada properties and one Wyndham. All these are located in the old city center of the Doha and are quite close to the airport.

The cheaper Ramada property would have required 15K points and the more expensive 30K points.

It pays to be part of number of frequent guest programs as not all the chains has coverage in all cities or offer reasonable point based pricing.

On this trip I decided to check out the new Hilton in Doha and use Hilton’s Points & Money awards. I am going to be back next week for a night as well and have decided to stay at one of the Marriott Rewards properties as they are offering exceptionally good redemption value for Doha.

Sometimes SPG’s categories seem to be somewhat unreasonable as is the case in Doha. Both the old Sheraton and the brand new St Regis are very expensive to use points. The best Starwood option is the W that is still category 5 hotel.