Saudia joined the SkyTeam on May 29th, 2012. Delta SkyMiles SkyTeam wide status benefits, when it comes to priority check in and lounge access, should now apply for flights taken on Saudia. Also, earning and burning of SkyMiles should be possible, but Delta’s website doesn’t have any mentions of Saudia on its partner page.

Saudia has a very good coverage in the Middle East and on the Indian Subcontinent. There are quite a few restrictions on transfers and whether you need a visa or not. This makes Saudia more complicated partner for transfer purposes. Always check Timatic first.

There is a list of eligible fare classes for mileage accrual on AR that is divided between Domestic, Regional, and International. Lower fare classes earn very little on domestic and regional flights, but you might have better luck on international flights.

Aerolineas Argentinas was renationalized back in 2008 and is till bleeding money. According to an Associated Press article the airline received $200 million in subsidies in the first quarter of 2012 alone. 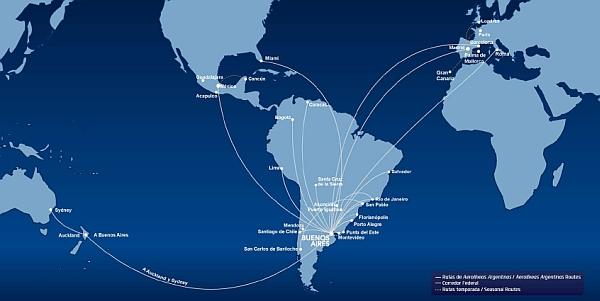 The airline flies to Miami and Mexico City in the North America, and Madrid, Barcelona, and Rome in Europe. This will help with using SkyMiles for travel to/from South America. The only drawback is that you need to call to make an award reservation if it involves AR.

Delta is terminating its partnership with Kingfisher on October 1st and with Jet Airways on October 15th. Normally you can make redemptions until the partnership ends as far in the future as the schedule is open.

It is really not a surprise that Delta is ending the partnership with the Kingfisher. The airline has been in huge financial turmoil this year and has ceased all the international operations. They had few planes repoed at airports. Not nice. Right now they only operate in domestically in India using less than 20 airplanes.

It is sad, however, to see that the partnership with Jet Airways is ending. It is one of the better Indian airlines and, although it is going through some financial difficulties, they are nowhere as bad as Kingfisher’s.