Earlier in the year, I had less than satisfactory stay at the Hilton Narita hotel. I wrote a quick email to Hilton Diamond desk about it and requested that they forward the matter to Hilton Guest Assistance department for resolution.

How to write a good hotel complaint letter? Read more.

Apparently the Hilton Narita didn’t reply to the file that the Guest Assistance department opened and they decided to send me a “Be My Guest” certificate that is valid at any Hilton property worldwide. I have received couple of these certificates in previous years, but they were valid only at domestic properties in the United States. These new certificates are valid worldwide.

The certificate itself says that it is valid at “Hilton Worldwide” and “… valid at any Hilton Hotel Worldwide”. This is somewhat confusing because the chain is called Hilton, but includes number of other brands as well i.e. DoubleTree & Conrad. Supposedly these are only valid at the brand listed on the certificate. 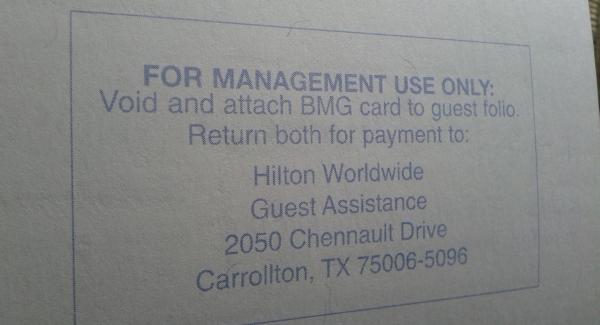 The going rate for the night was in excess of 40K THB for the night using the Best Available Rate. There was a discounted rate as well, but it would have been prepaid. The hotel accepted the certificate and I spent the second night at the two bedroom pool villa. I will later post a review and a video that I took about it.

You may wonder why these certificates are called “Be My Guest”. That was the name of the book that was written by Conrad Hilton, the founder of Hilton hotels.