Over the years, I have saved a lot by using Priceline for hotel bookings. As a matter of fact, Priceline got me hooked on hotel programs, when you were able to get a Hyatt hotel for $50 bucks and it would be a qualifying stay for both  promotional purposes and a stay credit as long as you had a minimal charge and used a MasterCard to settle the bill.

Those days are long gone, but there are still lots of opportunities to save on hotel stays using Priceline. I usually try first getting a decent deal by booking direct, but sometimes it just doesn’t produce the rates that I am happy to pay.

There are several websites that can provide tips and assistance on Priceline bookings. The two that provide the most information are BiddingForTravel (www.biddingfortravel.com) and BetterBidding (www.betterbidding.com). Both of these sites contain list of successful bids for various cities that bidders have successfully gotten on Priceline and other useful information about Priceline strategies etc.

My Bidding Experience for Vancouver BC

The other weekend I was in Vancouver. The rates at the downtown hotels were on the high side and I decided to give a Priceline a try.

First, I checked both the BetterBidding and BiddingForTravel to get an idea about the hotels that one might expect to receive and the price range. Both websites also provide a list and star rating of hotels that are available in each of the Priceline zones.

I was targeting a hotel in either of the two zones in downtown Vancouver. It didn’t matter if the hotel is in the downtown or entertainment district, but I needed something four stars according to the Priceline.

For Vancouver area Priceline has 11 different zones. These help with rebidding as only 4 of the zones has four star properties. I could rebid total of 8 times if I include the two downtown zones to get the best deal around.

You have to be very careful with the Priceline zones. Sometimes Priceline has a hotel that is exactly on the border of the zone.

As always I want to get some cashback for my online purchases. There are several sites that offer cashback for Priceline. This time I decided to use TopCashBack that had 3% rebate for Priceline “Name Your Own Price” bookings.

Priceline is now offering three different kind of bookings; the traditional hotel booking that shows the name of the hotel and the price, the Name Your Own Price bidding, and Express Deals. You need to choose the “Name Your Own Price” tab for the best savings. I have not found the conventional prices on Priceline to be anything worthwhile, although I used them once for a Best Rate Guarantee with Marriott.

When you choose the “Name Your Own Price”, you will be then presented with a “Lighbox” to enter the city and the dates.

I chose the Downtown Vancouver zone.

Then you need to choose the star level of the hotel. I chose four stars. There is a box on the bottom next to the bid amount that “shows” the supposedly median price for a four star property in downtown Vancouver. Priceline basically just tries to get you to overbid. You can just completely disregard it.

Based on the reports on both BetterBidding and BiddingForTravel, I decided to start at $76. There were fairly recent winning bids on the downtown zone for around $80 per night. The total price with the Priceline fees with this bid amount came to $95.30. The real tax rate in the Vancouver is 15.74%. The Priceline’s fee in this instance would have been in excess of $7.

You should always decline the “garbage” Trip Protection Offers that all the travel websites are offering. They are there to fatten their bottom line. You should, however, have comprehensive travel insurance.

It is good idea to familiarize yourself with the Priceline’s rules. Basically all these “Name Your Own Price” bookings are nonrefundable and noncancellable. Do NOT book through this service if your plans are not firm. I only use Priceline for same or next day bookings when I am already in the city. Then you need to fill out your credit card and address information.

You will then see a Priceline “negotiator” screen for few seconds while Priceline is trying to match hotel offers with the price that you bid.

If your bid was not successful but  was close to a price that Priceline could offer, you are then presented an offer to up your bid to a certain amount, on this instance to $89, without having to choose any other options. You should always decline this offer as you can get the hotel at significantly less through the rebidding process.

As I pointed out earlier, there are numerous rebidding opportunities in the Vancouver area where there are no 4 star hotels offered by Priceline. I decided to up my bid by $1 at a time and just go through number of different zones.

After adding couple of different zones my bid had been upped to $79. 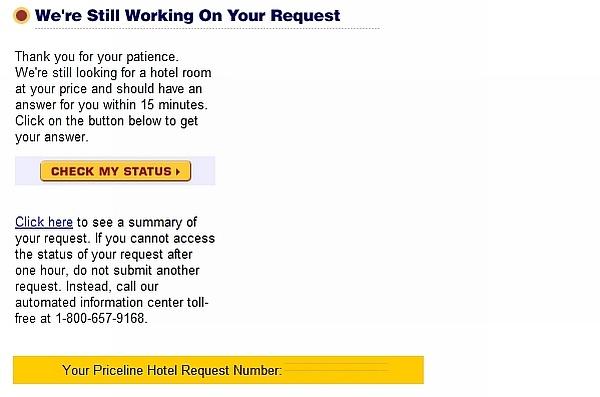 This time I received a message that Priceline was working on my request. This is usually a sign that your offer has been accepted.

My bid of $79 was accepted at the Renaissance Harbourside hotel. This suited me well because I am a Marriott Platinum member and the status benefits typically are extended to Priceline stays as well.

The lowest rate on Marriott website was 239 CAD for the night in question before the taxes.

How was my stay at the Renaissance?

It was not the most modern Marriott chain hotel and obviously they do have some sort of revenue problem if they need to dump rooms on Priceline for $79 per night during the height of the summer season.

I received probably the smallest room I have had so far this year, but all the Platinum benefits including welcome amenity and lounge access were extended. Cannot really complain considering the price I paid.

You should always keep in mind that there is an option of bidding hotel rooms through Priceline’s “Name Your Own Price”. The savings are usually significant enough to put up with the bidding process and the time it requires.

Priceline works remarkably well in North America but not so in some other countries.