This is one of those hotels that have an interesting history. At one point in time, it was operated under the Le Meridien brand and owned directly by the now disgraced and bankrupt Lehman Brothers investment bank. 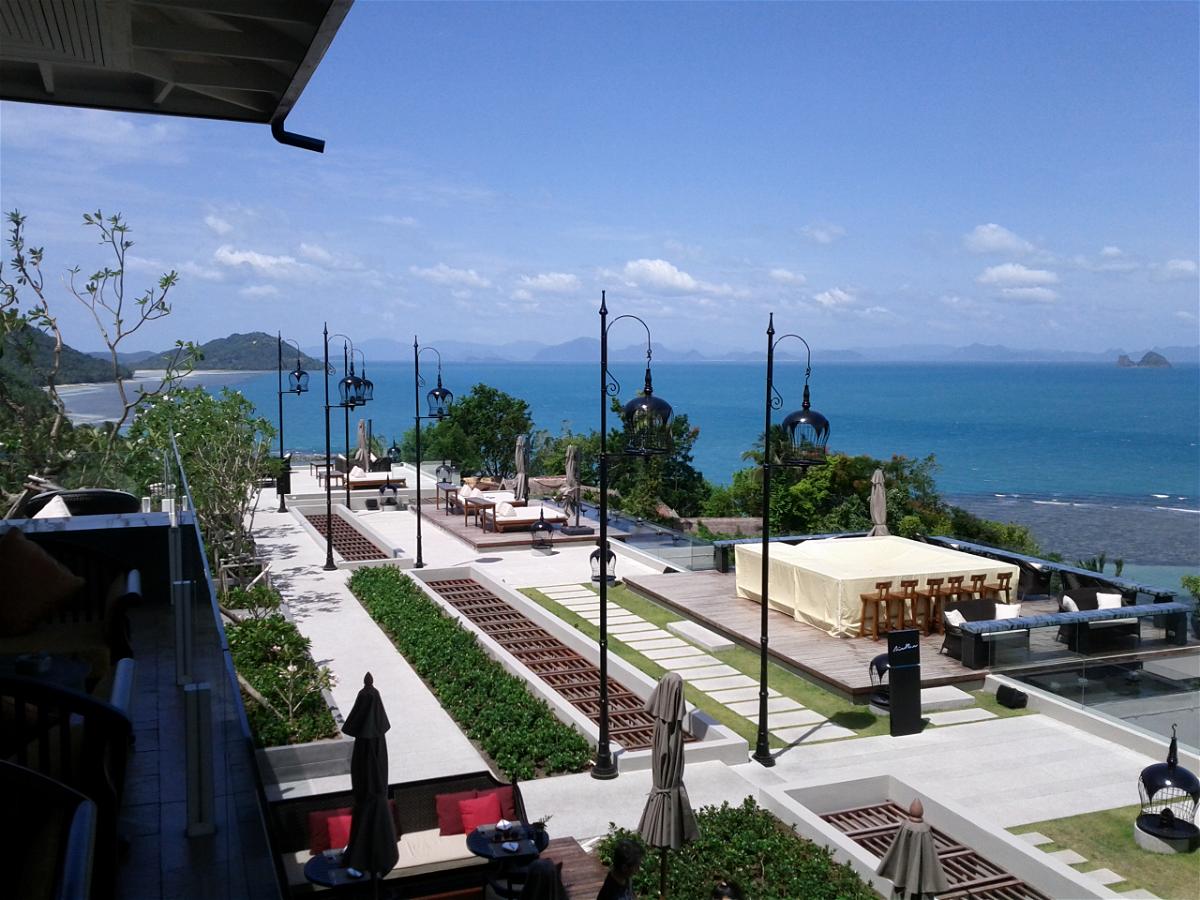 The hotel is located on the exact opposite side of the Koh Samui airport. The ride from the airport to the resort can take from anywhere 45 to 60 minutes depending on the traffic. The distance itself is not that great but the road infrastructure is very bad on the island.

The location from the mainland ferry and the city, where all the government services are located, is about 20 minutes ride away.

The reception building is built on the mountain and you have great views of the beach and the sea from the units that are on the main building and from the high villas.

There are three types of accommodations at this resort:

2. Villas on the hill

3. Villas on the beach

I was coming from the nearby Conrad Koh Samui resort where I had spent two nights. The problem I have with Koh Samui island is the lack of taxis. You are forced to use either hotel cars or “taxis” that refuse to use meters. You can rent a car to get around as well, but as I said earlier the traffic is very chaotic.

I had booked the most basic accommodation as an Royal Ambassador and counting in on my luck with a nice upgrade. The hotel had preupgraded me to one of the mountain villas.

As is the custom in Thailand, the front desk photocopies your passport and swipes your credit card. I also met the customer service manager who happened to be a gentleman from Sweden and had worked for this resort for quite a few years already.

This was an upper part of a villa that probably had been a single unit in the past. It wasn’t a suite but a very spacious room with a sitting area, work desk, bed in the middle, shower and the vanity area in the back.

The toilet is somewhat weird. It was in a very small space resembling a tiny closet. This was an obvious afterthought.

The best part of this villa was the fantastic view of the sea from the very large balcony area that had plenty of space and really nice sitting area.

The minibar with the wine “cellar” was one of the most complete that I had seen at any hotel. The problem was that only the minibar beverages inside the fridge were complimentary per the Royal Ambassador benefit letter that I received. I think that this is rather understandable for the wine but not for the other alcohol. I hadn’t come here to party so it was ok with me.

I had a nice fruit presentation waiting in the villa, but the problem was the number of tiny fruit flies that it had attracted. I had to promptly move it to outside.

After a while, I became curious, why the temperature of the villa hadn’t come down at all regardless of the unit blowing at the full speed. I called maintenance to fix it. It took two hours for them to realize that the air compressor unit was faulty and that they would need to move me to somewhere else.

So, after the air compressor fault, I was moved to a proper ocean view villa with its own small pool. It also had a direct beach access from the villa. This was much better location than the 614.

It had a separate bathroom with a large tub, indoor and outdoor showers, toilet, and vanity area.

The bedroom wasn’t as spacious as in the 516 but really liked the own pool and sitting area outside with sun chairs etc.

This was only a short walk away from the main pool and some restaurants.

There was some water leagake between the tiles. I had a maintenance coming to have a look at it twice, but they couldn’t fix the problem. This was in the bathroom.

I had a rather unhealthy breakfast with some Heineken by the pool.

Restaurant breakfast the following morning was better than what I had expected. They had plenty of hot and cold options to choose from.

Overall, if you prefer privacy and having a leisurely lunch, it is probably better to use the room service. For greater selection and getting out of the villa, then go to the restaurant.

This was bit of a disappointment. It was within a short walking distance from the villa, but wasn’t as comprehensive that I would have expected. They didn’t have any headphones available, although they had cardio machines with built in TV’s. Luckily, I had brought mine.

After the initial problem with the first unit, I was very satisfied with the upgrade that I received. You really cannot expect the resort to give the wine selection as minibar beverages, but they should have included at least some of the other alcohol besides the beers.

It was a nice touch from the manager to send a complimentary bottle of sparkling wine after the problems I had with both of the units.

I have been to several resorts in Koh Samui previously; Renaissance, Le Meridien, and the Conrad Koh Samui. The Conrad is more luxurious but at the same time is about the double the price compared to this InterContinental resort. There is no beach at the Conrad but there is one at the InterContinental.

Overall, I really liked this resort. The only downside that I can think of is the location exactly on the opposite side of the island from any nightlife activities.

The couple of issues I had were solved amicably and I am sure that I will return to this resort in the next 12 months.