Priority Club has been running very good promotions this year. I have written about two rebate promotions that they have had. One was for weekend stays and included a $75 rebate and the other one was for weekday stays for $50 rebate for a two night stay.

I have done quite a few rebates in the past and, quite frankly, hate doing them. This is really why the companies love them. People take the rebates into account when they are making the purchase decision, but forget to follow up with the requirements later when it comes to time to submit them.

In my case I maxed out the weekend promotion as I had four stays of two days or longer and I had one submission for the weekday promotion as well.  The total rebate amount is $350 so it was definitely worth spending some time filling out the forms and mailing out the required documents.

I had saved all the receipts for the hotel stays, but it took a while to find them all. I have quite a few hotel folios saved. I decided also to include copies of the reservations I had made.

Steps that I had to take:

1. Find the original confirmation email that I had registered for the promotion. Print one copy for each rebate submission.

2. Fill out the rebate forms and submit them online. Print out the forms.

3. Attach the hotel folio(s) and the reservation confirmation(s).

4. Make sure that you are attaching the right folios and rebate submissions.

5. Put them each of the rebate submissions to their own envelope.

I was in Sao Paulo and it took about an hour to get all these ready. Luckily, I was able to use the laser printer at the Grand Hyatt Sao Paulo to print out the rebate forms and reservation emails. The post office was also nearby.

Quite frankly I wouldn’t have bothered with these rebates, but the fulfillment was done by a company called Parago/RebatesHQ. I knew from my previous experience with them that, if they mistakenly invalidate the rebate submission, a phone call or an email will get them to revalidate the submission as an one time courtesy. 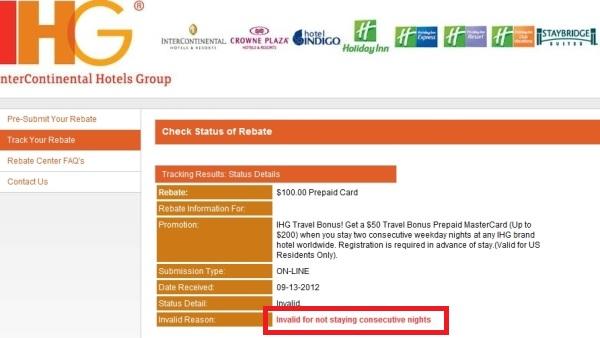 It took about two weeks for them to receive the submission and process them. I received an email confirmation that they had received and processed each of the rebates that I had submitted. They had invalidated four out of the five submissions that I had done. I wasn’t surprised about this at all.

They had an option to chat over the web and I was able to get all the four submissions validated over one session. The person dealing with the issue was able to see that they had misprocessed the rebates. Now, I am only waiting for the “processing” period to end.

Rebate promotions are not my favorite ones, but you can save quite a bit by taking advantage of them. You just need to make sure that you are following the rebate rules by the letter and keep copies of all the documents submitted.

Often rebates come back as invalid for one reason or another. This is just part of the game. You need to call, email, or chat and have them to revalidate them.