For the past week, I have been in Jakarta and had a side strip over the weekend to Bandung. The Indonesian economy is heating up and there aren’t that many international hotels in Jakarta compared to other capital cities in Asia. To make things more complicated, I rarely book more than a day in advance.

I made an award reservation to Grand Hyatt Jakarta when I was on my way from Bandung to Jakarta. The availability was fine.

On Tuesday morning, I decided that I could spend another night at the Grand Hyatt using points but online only showed Club Room King award availability at 10K points per night. The regular redemption rate is 8K per night and I would be eligible for club anyway for being a Diamond member.

I decided to call the Grand Club and ask them to extend my stay by a night using the 8K rate. They called me back and told that they could only do it at the 10K rate. Oh well. I decided to pass this opportunity to “over” pay and just said that I will book another hotel.

Few hours later in the afternoon, when I was checking availability, the King Room was available for sale and thus for awards as well. Then, I just made another award reservation online for the night.

On Tuesday the Grand Hyatt was completely sold out for the Wednesday night. On Wednesday morning, however, the availability was wide open again. I just made another award reservation for tonight.

Later in the day the hotel was sold out again.

It pays to check the award availability daily and sometimes even several times during the day. If guests are canceling their reservations or upgrades are given, it often makes base level room available for sale and awards.

I was somewhat surprised that they weren’t willing to extend my stay on Tuesday at the regular award level, but I had to wait for the inventory open up and to make it by myself. Bit of flexibility goes a long way.

Welcome to our weekly video review on hotel suites and rooms around the world! This week’s edition features the Fenix...

World of Hyatt has launched yet another promotion to buy points at 30% bonus when buying 3000 points or more,... 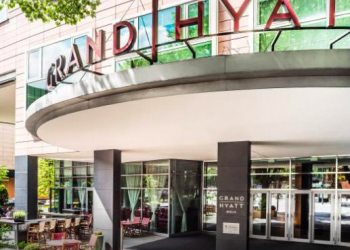