American Airlines has slowly expanded the number of airlines that are bookable on AA.com. Finnair and Air Berlin just joined Alaska Airlines, British Airways, Hawaiian, and Qantas that were introduced earlier this year.

This makes booking awards online that connect to American or Qantas flights easier if you try to avoid British Airways metal due to very high fuel surcharges.

Here’s a simple search from Helsinki to Honolulu. The engine was able to find the business class availability by combining Finnair, Air Berlin, and American Airlines.

If you can avoid London Heathrow and British Airways, you can keep the taxes at rather reasonable level. 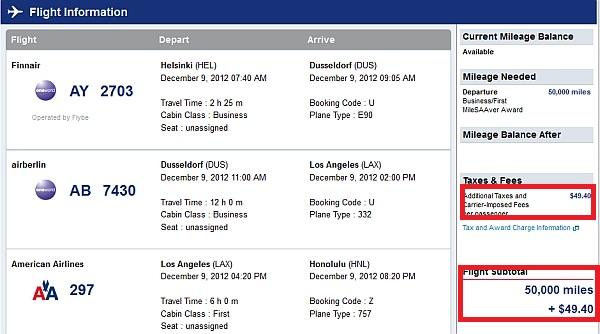 It is very good that American makes more of their partners bookable online as United has already done. American still has more than 15 partners that they could implement to their online award searches. I hope that they would speed up the process.