Etihad and Air France-KLM announced a wide ranging codeshare partnership earlier this month and Etihad also brought Air Berlin into the partnership. Now, Air France has publicly announced that it would like Air Berlin to join SkyTeam. 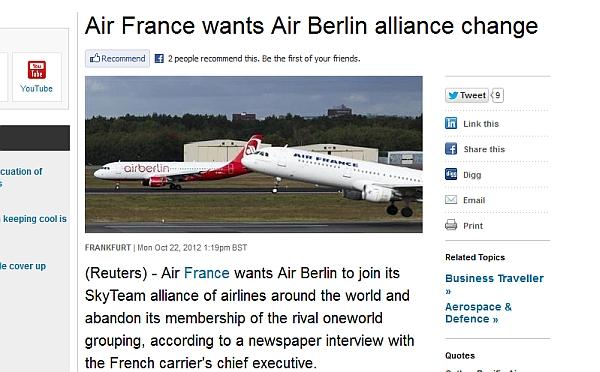 Air Berlin just joined the oneworld alliance on March 20th this year. The carrier has gone through some financial difficulties as of late. Etihad Airways owns 29% of the airline and has loaned some money to it as well. Etihad has not aligned itself with any of the alliances and its rival Qatar Airways became an oneworld candidate earlier this month.

Air Berlin is bit of an alliance outlier based in Berlin the capital of Germany. Most of the oneworld member airlines serve the financial capital of the country that is Frankfurt. There is not a lot of connectivity at the Berlin and the situation with the opening of the now delayed airport is not helping either.

It is very interesting to see how this is going to play out. Although I am SkyTeam Elite+ member via Delta’s program, I prefer Star Alliance or oneworld alliance. Air Berlin and S7 are the only oneworld alliance members that I have yet to fly.