Here our monthly blog post about hotel loyalty promotions. You can now find an updated list just by clicking the “Hotel Promotions” tab. This will be updated throughout the month when promotions expire and new ones are announced.

You can forward emails about promotions that you receive from hotels and airlines to john@loyaltylobby.com. Most of the promotions are open to all, but sometimes well hidden.

Make sure that you take advantage of cashback rebates that you can get for booking your hotel stays online.

Getting Cashback for Your Hotel and Travel Bookings

Le Club Accorhotels members can earn triple points for weekend stays until December 30, 2012. You need to make the booking by November 25.

You can get instant Platinum status with Le Club Accorhotels just by signing up to the program. 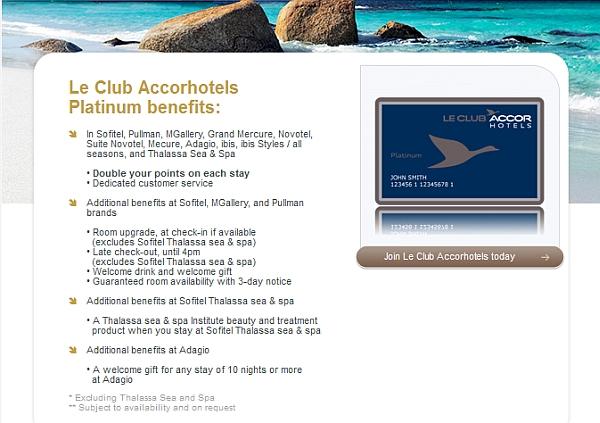 Le Club Accorhotels has a Facebook game for total of 2000 free points over four week period. You only need to match 10 hotels with correct cities on the map. 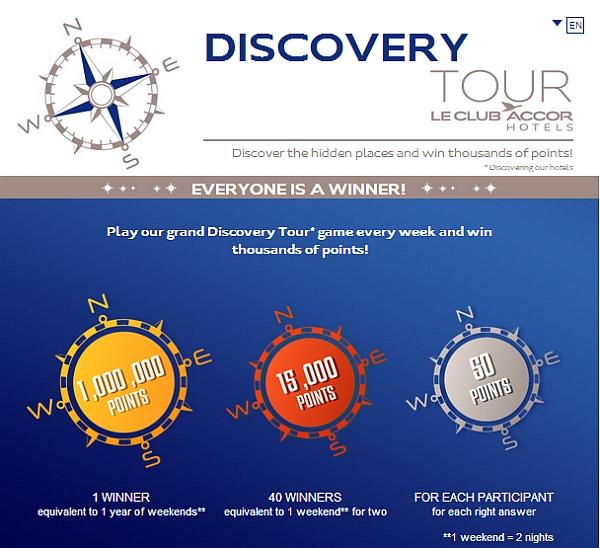 Get 2000 Le Club Accorhotels Points for Matching Properties with Cities

Best Western’s fall promotion for double/triple points is starting on September 23rd and ends on November 18th, 2012. You can read more about this promo by following the link.

Club Carlson has a global “Stay More Nights – Earn More Points” promotion for up to 120K bonus points for 20 nights. This promotion is valid until December 31, 2012.

You can get a free night voucher for every two night stay at the Country Inns & Suites locations in the United States and Canada. This offer is valid from October 1 to November 30, 2012.

You can get triple points + 2000 bonus points by booking a breakfast package. This promotion is valid until December 31st, 2012 at selected Radisson & Radisson Blu locations. 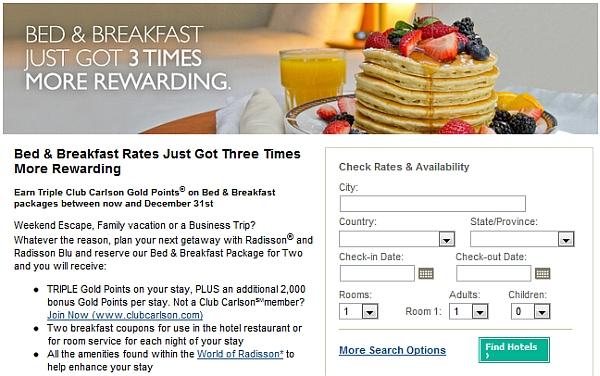 You can get triple American Airline miles (1500) for Radisson/Radisson Blu stays worldwide until December 20th, 2012.

Club Carlson is offering award at 50% off at select hotels in Europe, Middle East & Africa. This offer is valid until March 31, 2012.

Here are few other interesting posts about the Club Carlson program:

There is an elite offer for 2 for 1 and 4 for 2. You need to be a Gold or Concierge member to take advantage of these discounts that are valid in Europe, Middle East Africa.

You can get a Club Carlson Gold through a status match or being a shareholder:

If you have a friend or family member working for any Carlson hotel, you maybe eligible for the Friends & family discount:

Hilton’s next chainwide 4th quarter “1,000 Reasons” promotion kicks of on November 1 and ends on December 31, 2012. You will get 1000 bonus Hilton HHonors points per night for Thursday to Monday nights. 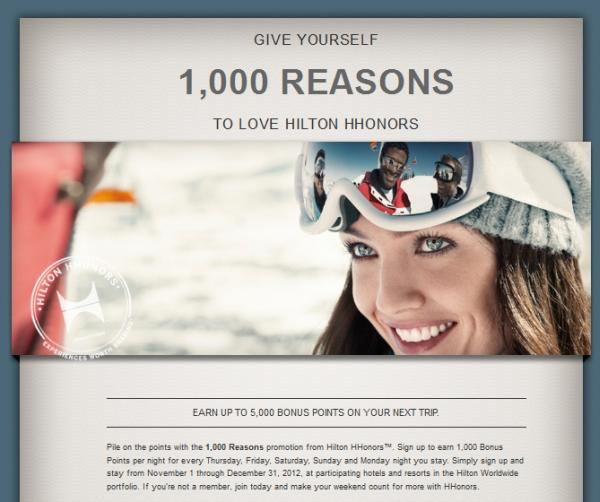 Hilton offers number of airline related bonus offers in the 4th quarter of 2012. I have summarized them all in one post.

You can earn 250 Delta MQM’s and double SkyMiles for stays of 2 nights or longer between October 1 and December 15, 2012. This offer is available at select hotels. 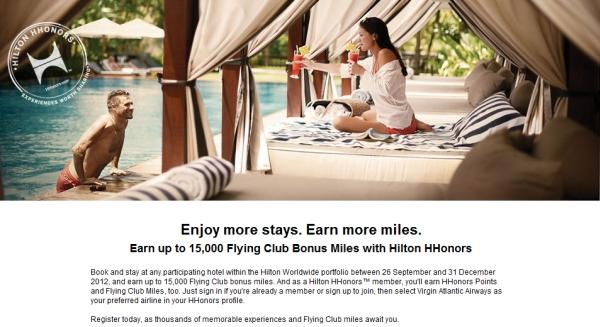 Hilton is offering double points for Air Canada Aeroplan members until the end of December, 2012.

You can also earn triple Asiana Club miles for Hilton stays until November 30, 2012.

Hilton has a special “Be Yourself” package for Conrad resorts. Gold/Diamond members will receive 5000 bonus points per stay.

Hilton is offering instant Gold status until 2014 and bonus points/miles for American, Delta, JetBlue, United, US Airways, and Virgin American frequent fliers. This offer is targeted. 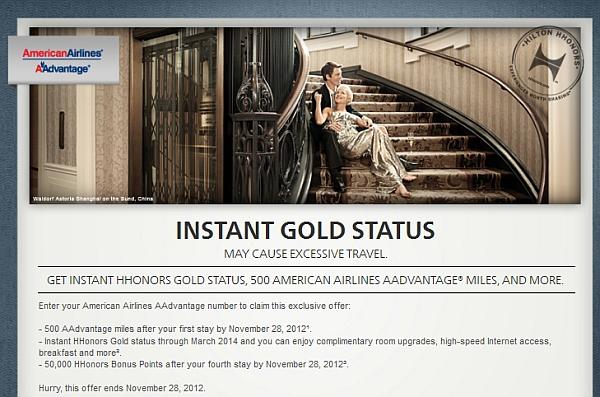 You can get free 500 Hilton HHonors points for liking Hampton Inn on Facebook.

Here are some other important posts:

You can read about getting a status match with Hilton HHonors:

It can make sense to use Virgin Atlantic as Double Dip partner and then transfer the miles back to Hilton. You can read more about this here:

Hyatt’s fall 2012 promotion is valid from September 1st to November 30th, 2012. You will earn 5000 bonus points after 5 nights and 10000 bonus points for every additional five nights for maximum bonus of 65000 Hyatt Gold Passport points.

Here are couple of other important posts:

Hyatt also offers status matches/trials. You can read more about them here:

Sometimes it makes sense to use Hyatt Stay Certificate instead of paying. You can read about more of them here:

Hyatt Stay Certificates – Way to Save Money On Hyatt Stays

Just a word of warning. Some of these promotions may require an address to be in a specific country/area like United States. I take absolutely no guarantees what will post to your Priority Club account.  They may also conflict with a promotion that you have already signed up for and just return an error message.

There is an interesting “Roles To Rooms’ promotion for total of 15K bonus points for four stays. This promotion appears to be geographically targeted to Asia Pacific region.

Here’s an update about the “Roles to Room” promotion:

Here’s second update about this promotion:

You can get 5000 bonus Priority Cub points for staying two consecutive nights at Candlewood or Staybridge Suites property in the United States by December 30th, 2012.

Triple points for stays at select properties in the Iberian peninsula. Valid until the end of December.

These are valid from October 1st to December 31st, 2012. You should sign up for 5K, 10K or 15K variation of this offer depending how many IHG nights you are planning to have on the 4th quarter.

Priority Club has a bonus offer for Meeting Planners that book a qualified meeting by February 28, 2013 for January 1 to March 31, 2013.

Priority Club is offering a $100 rebate for every stay of 3 nights or longer within 90 days of your wedding, This promotion is valid until the end of 2012.

You can get up to five codes that you can redeem for various gift card by booking online or mobile on any of IHG branded websites.

There are number of surveys that you can do in number of different languages for a quick 2000 Priority Club points, if you haven’t done any of them earlier. This is a quick way to get some points. My points posted immediately.

Not sure what is going on with this promotion, but you can try to see if it works for you.

You can get easy 300 points by installing a Priority Club shopping toolbar.

This is most lucrative of the offers. You will get additional 1000 Priority Club points per stay for 90 days after your sign up.  Just enroll just before your first stay to maximize the earning period.

You will receive 1000 bonus Priority Club points per stay for the next 60 days after registering for this promotion. Just enroll just before your first stay to maximize the earning period.

This works for sure if you are a Platinum member, but could work for Gold’s as well. Doesn’t hurt to sign up, right? You will get 3000 bonus Priority Club points for your next stay. You will need to have the stay within 90 days after signing up. You can only earn this once.

This is another 3000 bonus points for an elite member. It posts for sure if you are Platinum but might work for a Gold account as well. You need to do the stay within 90 days of registering for this offer.

You will get 1500 Priority Club bonus points for one stay after signing up. You need do stay within 90 days.

This is a new member bonus, but works for existing members as well. You will get onetime 1500 Priority Club bonus points after signing up. You need do stay within 90 days after registration.

This should be open for elite and non-elite members. You will get onetime bonus of 1500 Priority club points after a paid stay. The stay must be within 90 days after registration.

This should be open for all. You will get 5000 Priority Club bonus points for a two night weekend stay. Weekend is typically defined Friday/Saturday/Sunday nights. The stay must occur before the end of 2012. This promotion may require your Priority Club access to be in the United States. The promotion did post for me after a while. This promotion can be done several times.

You need to be a Priority Club Gold or lower member and do the required number of stays to get the Platinum status + bonus points.

Marriott has their usual fall MegaBonus starting on September 15th and ends on January 15th 2013. You need, however, register for the promotion by October 31st, 2012.

You can earn triple airline miles tarting on your second stay on Marriott’s MegaMiles promotion that ends on October 30th, 2012.

Here are three other posts about Marriott Rewards:

You can get Southwest Rapid Rewards points for Marriott Gift card purchases.

Marriott also offers status matches or taste of Platinum/Gold. You can read more about the procedures of getting one here:

If you haven’t been targeted to any of the promotions or you would like to change to another one, you can follow the instructions to get the promotion fixed for you.

Ritz-Carlton has an offer for 30K bonus points for a stay of four nights or longer. This offer is valid until October 15th, 2012.

You can take advantage of four different promotions during this period. I have revisited the promotion after the bonus for FourSquare check ins was introduced.

You can now get 500 bonus points for making the booking using the SPG Android app just like if you had done it using the iPhone one.

You can get another 250 bonus points for FourSquare check ins during the promotional period.

Starwood has a promotion with Air Canada’s Aeroplan for maximum of 8000 bonus miles. This is in addition to the Starpoints that you earn. Promotion is valid from September 10 to December 9, 2012.

You can get 1000 Delta SkyMiles or US Airways Dividend Miles for booking a special (expensive) rate plan.

Starwood has a Redeem & Rewards promotion for  30% to 50% discount on the number of points needed for a free night at 21 of their properties in the United States, Canada, and the Caribbean. You need to register by November 30, 2012. 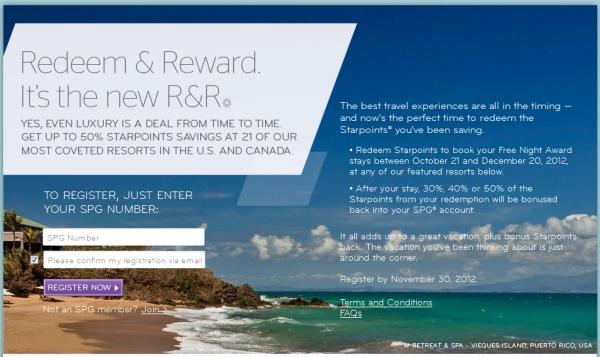 SPG Redeem & Reward Promotion: Save 30% to 50% of Starpoints Required for an Award

Starwood doesn’t offer straight status matches, but they can offer you a challenge:

Wyndham’s promotion for 16K bonus points for a stay at any one of their 20 new properties in the United States has returned. You can earn this bonus maximum of 3 times. The promotion is valid until December 31, 2012.

Wyndham’s autumn promotion is extra points or miles for second and fourth stay before November 30, 2012.

You should always carefully all the promotion opportunities out there. I will have a new post up tomorrow for my personal top picks for November.

SAS Teetering on the Brink of Bankruptcy?