Can I just start saying how much I hate DCC (Dynamic Currency Conversion)? This is the ATM or POS (points of sale) automatically converting, using inflated exchange rates, the charge currency to the currency of the issuing country of your card. This is always done for your “convenience” notwithstanding that Visa, MasterCard or American Express would do it automatically and using better rates.

You can come across this DCC at ATM’s also. I wrote about my experience at the Travelex ATM’s in the London Heathrow airport earlier this year. I had a déjà vu on Saturday when I was withdrawing Swiss Francs from my account based in the United States.

I had to get some US dollar or Euros, as I was on my way to Myanmar, where there are not international ATM’s or POS. Some hotels there do accept credit cards, but they charge these through their affiliates in Singapore or other nearby countries and tack a 7% or higher service fee for doing so.

So, I needed to withdraw francs from my USD account and then exchange them back to USD. Of course, I was going to lose my shirt in the process. 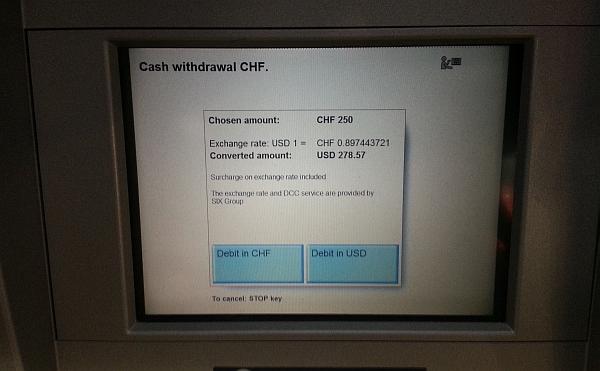 The Credit Suisse account was willing to sell me 250 CHF for $278.57. To their credit, they clearly display the exchange rate and the fact that the surcharge is included on the rate. They even mention DCC, although not in the full form. What I don’t like, however, is the fact that they don’t present a “real” rate for comparison purposes.

I declined this “service” and proceed to have the charge made in CHF. The amount of USD that was withdrawn from my account was $271.85. For sure the $271.85 had some sort of fee built in as well. The Credit Suisse rate was 2.4% worse than the one offered by the financial institution that I used.

The 250 CHF then turned to $250 using the Credit Suisse foreign exchange. Yes, I know. The rate offered by the Credit Suisse was bad as they always are at the airports. This time, however, I really didn’t have a choice and I ended up paying $21.85 for the privilege of being able to withdraw cash from my account and turning them back to USD.

You should always be very worry when an ATM or merchant presents you an opportunity to have the charge made in the currency of the bank that issued your card. You are most likely going to lose around 3% to 5% during the process. There is absolutely no benefit for you for not having the Visa, MasterCard or American Express rather do the conversion.

And always try to avoid the foreign exchange shops at the airports. The rates are almost always universally bad.