SPG started last year to publish some interesting figures about what their members has been doing in 2011. They have done the same for 2012 as well that is based on the activity by November 30, 2012. You can access the SPG’s A Toast To You webpage here.

There is also a personalized version available for SPG Platinum members that you can access here.

To earn 955K+ points, you probably have to spend around $150K. There are always promotions for double/triple points and the member must be a 75++ stays and gets at 4 Starpoints per dollar as a base.

Someone has done lot of wining & dining at Starwood properties to have earned 400K+ points.

Things start to go really wrong here. Redeeming 870K Starpoints for a business class ticket for two from Los Angeles to Rome? The SPG Flights is not a very good redemption option. You only get 1,2 to 1.3 cents per Starpoint, but the flights book into revenue buckets and you earn elite qualifying and award miles from those flights as well.

Better option would have been to redeem about half the miles and used standard award on number of US airlines that guarantees last seat availability.

Although I like the St Regis hotel in Bali and I have stayed there, someone must be totally nuts to use 960K points for ten night vacation there. SPG awards at number of locations that are not considered standard such as St Regis Bali are extremely bad value.

I don’t understand anything about the sports,so cannot comment the value of this. There are, however, quite a few good deal via SPG Moments that I have been thinking of taking advantage of.

It doesn’t come as a surprise that a Westin hotel in Hawaii would be the most popular spot for redeeming Starpoints. Definitely not something for me.

Not really a surprise that some member had visited 92 different SPG hotels in a year or 24 countries. I didn’t visit Sheraton Macao, but stayed at the fantastic Conrad hotel that is on the same complex. I don’t really read SPG reviews & ratings. I rather check TripAdvisor and/or FlyerTalk.

I have always chosen the Platinum gift points of 500 at full service locations instead of food & beverage amenity or something else. And I have never used any of the SNA’s (Suite Night Awards) or requested an early check in using Your24. I did, however, arranged one early check in using the Ambassador service.

25 lifetime Platinum members with more than 2000 nights. That’s not bad. Easily achievable in 10 years if someone travels heavily for business and always chooses Starwood property. 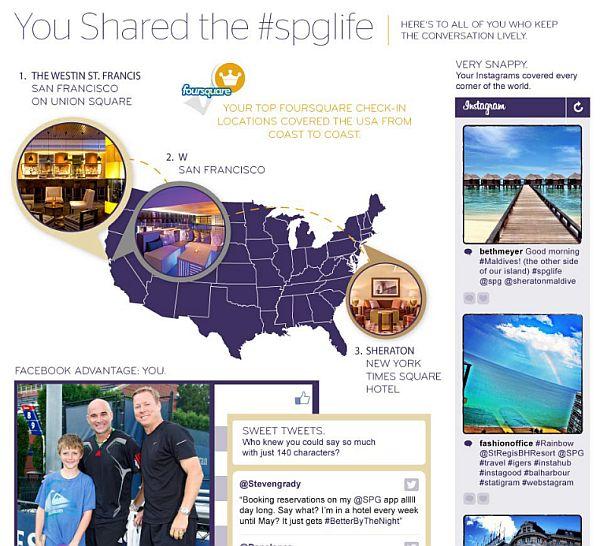 For sure SPG get’s lot of FourSquare activity, when they offer some extra points for check in like they did in 2011 and 2012. It does help them as most of the folks have probably linked their FourSquare accounts to Facebook and you get those annoying check in notices on your Facebook feed.

It is nice that SPG has this kind of year end summary in general what some SPG members have done, although redeeming for those flights and that St Regis suite in Bali make very little sense.