There was a piece on NY Post few days ago about alleged fraud that the management of Le Parker Meridien and Parker Palm Springs, both owned by the same company, had conducted over three year period and milked SPG out of more than million dollars in unwarranted reimbursements. 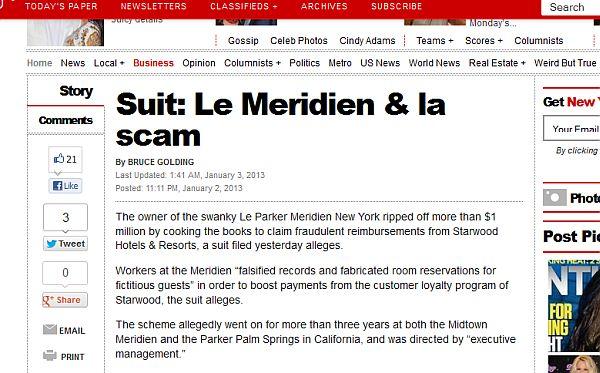 According to the NY Post article about the law suit, the management of the hotels had falsified records and fabricated room reservations in order to boost payments from the Starwood’s loyalty program.

It is quite surprising than this had been going on for several years, as hotel chains typically have auditors that try to catch this kind of behavior.

You may wonder, why this falsification of records and fabricated room reservations by the hotel?

The reimbursements from the loyalty program are usually the base level reimbursement that could be in this case $100 per night (the figure is just out of my head) and in the case of high occupancy (usually somewhere between 90% to 95%) the hotel gets the ADR of the night that well could be $500 for Le Parker Meridien in New York City.

If the hotel is close to the occupancy level that would trigger the higher reimbursement from the loyalty program that could well be additional $300 to 400 per staying award guest of the night, the monetary reward for falsifying few guest records to hit the high occupancy level is high.

I wrote last month about Le Parker Meridien’s attempt to gather more revenue by introducing mandatory facility fees that are hidden in the “taxes”.

It is likely that both of these properties will soon depart Starwood’s hotel portfolio. I have never stayed at the New York location, but the Parker Palm Springs is a wonderful, although bit quirky, hotel.