On January 25, I wrote a piece about Founderscard and whether the travel benefits would be worth the discounted yearly fee of $295. My findings were inconclusive. They might be worth the fee for you, but they weren’t definitely for me.

But it seems that the FoundersCard is not very fond of letting people know what are the benefits they offer. IMHO, you need to know the pricing of the benefits before you can make an informed decision to sign up or not.

In my original article, I just touched couple of benefits issues that they were actively offering in 2010 that turned out not to be exactly what had been written on their website. I decided to dig bit deeper this time.

FoundersCard was promoting instant Gold status and Platinum status for $99 in 2010. Also, they had access to coupon codes discounting American Airlines flights by 10%. 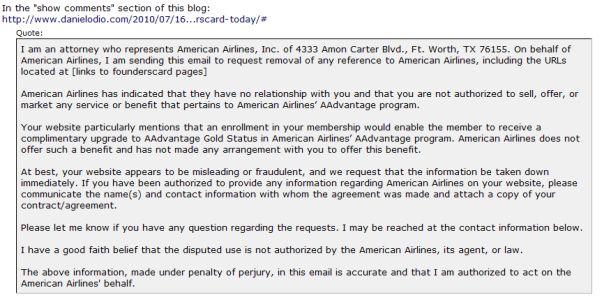 The above text is from TravelingBetter website that had copied it from one of the blogs touting this card for referral benefits. The comment left by American’s lawyer was removed later by the blog.

Once this benefit became publicized, it turned out that FoundersCard didn’t have any agreement place with American Airlines. They rather had a sales agreement with one of AA’s offices.

FoundersCard was offering Corporate Preferred status (also in 2010) that comes with some SPG Gold status type benefits. This was also removed and Starwood representative made the above announcement. 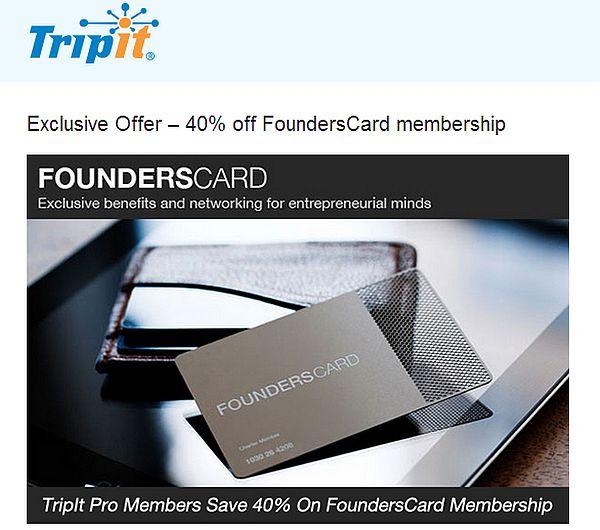 You can request preview access to FoundersCard’s website that allows you to check their hotel pricing and other benefits. Just copy paste the following link to your browser. (https://founderscard.com/membership?code=TRIPIT13) TripIt sent a blast email last week regarding this offer. You can also use the link to get the card for discounted rate of $295.

Quite frankly, I don’t know what benefits are for real and what are not. They had some serious issues in the past with both American Airlines and Starwood implying that they had deeper relationship with these two companies than they really had.