There has been a lot news lately about the possible merge of the two remaining US legacy carriers. Delta swallowed Northwest back in 2008 and Continental merged with United, although keeping the United name, in 2010. 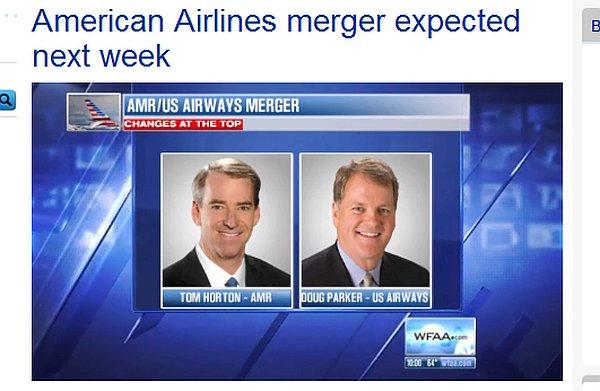 Now, Dallas based television station is reporting that the board of American Airlines is meeting next Monday and that the merger with US Airways may be announced as early as this coming Tuesday.

There is a interesting piece on the WFAA web page about this and you can also have a look at the TV new piece about this potential merger.

If these airlines announce the proposed merger on Tuesday, there is not going to be any short term changes. The merger needs to be approved by the both boards, the AA’s bankruptcy judge, US and European Union competition authorities etc.

It will likely take 6 to 12 months before they can officially merger and it will be business as usual for both airline during this process. Once the merger has been approved, it will likely take another year before the two airlines are actually merged and the frequent flier plans combined.

The combined airline would stay in Oneworld alliance and would be lead by US Airways CEO.

We should learn about this development next week. These song and dance around US and AA merge has been now going on for rather long time. The fact is that they are the only two legacy carriers in the United States that have not yet merged.