It is always nice to be surprised about the toiletries that some of the hotels have decided to use in their guest rooms. I know that some may think that this is truly trivial, but I am always delighted to have some quality stuff over generic Sysco crap. 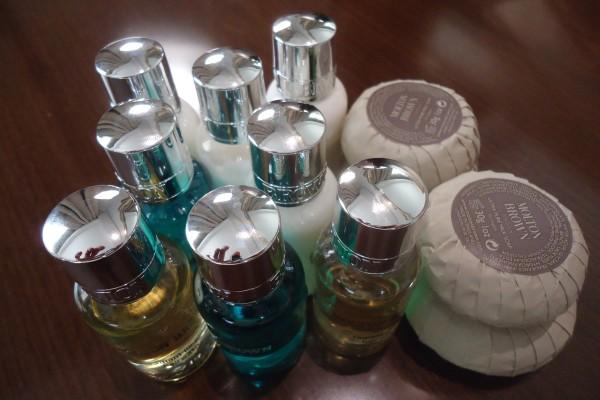 Just this past week, I checked into a Crowne Plaza Deira hotel in Dubai (former Renaissance) and couldn’t believe my eyes. They had Molton Brown products in their club rooms. Then, I remembered that the Crowne Plaza in Abu Dhabi also has this same arrangement.

One of the more memorable bathroom stuff from the past year or so, were the Acqua Di Parma set (or two) that I got from the Ritz-Carlton Millenia in Singapore. I had used the Eau De Toilette and deostick from Acqua Di Parma before and really liked them.

One of the all time favorites and absolutely stunning property as well, were the large sized Bvlgari amenities at the Grosvernor House in Dubai, where I have stayed at couple of times.

There are quite a few hotels that have L’Occitane products like Sheraton Barra & Taiper. I also had them at the InterContinental Montreal few months ago. Not sure what happened to Penhaligons line that quite a few InterContinental hotels used to carry few years ago. Haven’t seem them for a while.

I am guilty of taking and sometimes asking for an extra set, if the hotel has quality bathroom toiletries like the hotels mentioned above. It really is a nice touch and sets them apart of the hotels that have gone the cheapest Sysco products.