EU court has now rules that the EC 261/2004 compensation applies, if your flight was delayed that made you to miss your connecting flight and to arrive to your final destinations more than three hours late. There is a good piece about this on Bloomberg. 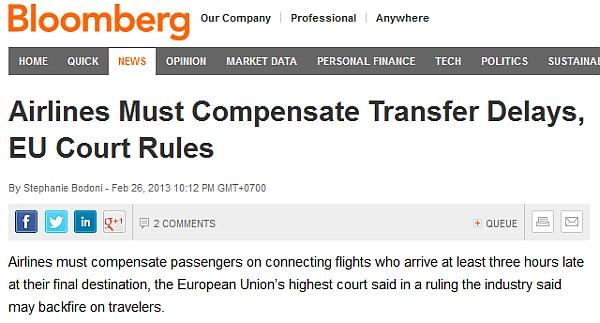 This has been the intention of the EC 261/2004 legislation,but airlines had argued that it was not and weren’t paying compensation. Now, the EU court has rules that as long as you arrive to your final destination more than 3 hours later, the compensation per this rule applies. You can read the entire ruling here.

You should download this “Your Passenger Rights” app to your smart phone.

The airlines have done pretty much anything they can to continue not to pay claims under this EU legislation. One by one their arguments have been shot down and there is not much left them to argue anymore.