Last month I spent half day at this property. I had a very early morning flight out on Emirates and decided to check out this brand new Marriott property that hadn’t had its grand opening at the time.

The hotel will have two towers once it is completely ready. Only one tower is operational right now. The second tower is expected to open sometime in 2014.

If you are driving your self and relying on a GPS unit, you may be up for a surprise. The GPS’s usually don’t come with the most updated maps. The GPS that was with the car was suggesting that there were no roads at all to the hotel.

The hotel is about half way from the airport and the Jumeirah beach area. The downtown Dubai mall and all the eateries are less than two kilometers from the hotel. There is nothing within walking distance.

Marriott Rewards Gold and Platinum members as well as club level guests can check in at the club lounge. The check in was fairly straight forward, but took bit longer than one would expect.

This was a typical King room on the 56th floor. According to the information on Marriott.com, the hotel has more than 120 suites but they don’t seem to volunteer them to Platinum members.

Unlike with quite a few other new hotels this one does have separate bathroom from the bedroom.

The bed was comfortable and good sized.

As we are in the Middle East, there was no Mormon bible on the night stand (as there are normally with Marriott hotels), but there was a Muslim prayer mat.

You had a full shower, bathtub and the usual sink/vanity area in the bathroom, but I was surprised that they didn’t have better bidet.

You controlled the lighting, do not disturb, and the temperature from the tablet that was next to the bed.

There was something wrong with the men’s locker room, as it was not operational during my stay. I was able to use the lockers on the SPA side before going to the fitness center.

The fitness center was rather large, but likely very busy once both of the towers are ready. Plenty of cardio machines were available.

The pool area was rather smallish considering the size of the hotel, but there was quite a bit of greenery on the pool level.

The Club lounge took the entire floor of the tower. There is adequate space right now, but it may be tights once the other tower is open as well. 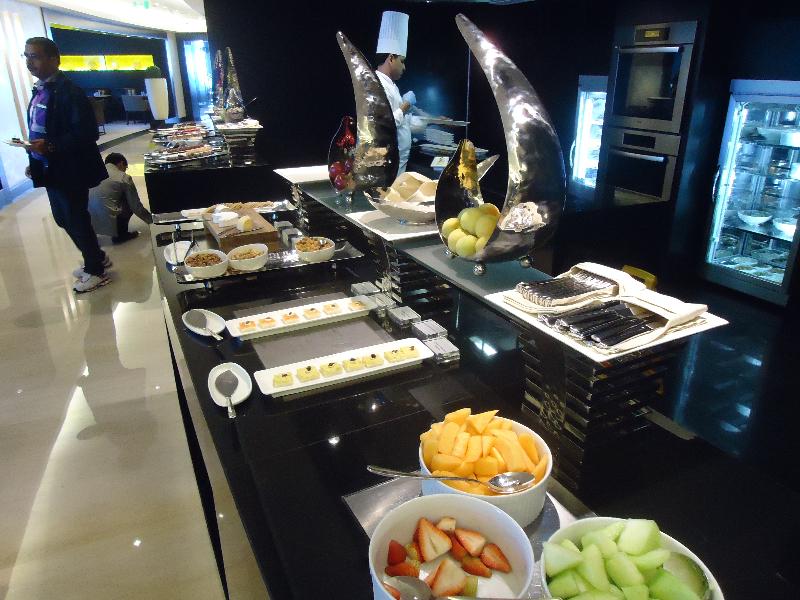 My only negative was the rather skimpy evening snacks and the lack of champagne. I had spent few nights at the InterContinental Festival City and they had a larger evening offering and proper champagne there. JW Marriott had Prosecco.

This is a HUGE hotel once the second tower has been opened. I am not sure a hotel with more 1500 rooms could even theoretically provide very individual service. The room was spacious, but felt that something was missing or not quite right. I was never able to get my head around this.

The hotel is definitely worth checking out if you find yourself in Dubai. There are so many different good options from all the chains and at various price points that making the choice where to stay at is sometimes difficult.