For the past couple of weeks I have been in Bangkok and I had the opportunity to stay at the newest Marriott branded hotel on its opening day, March 18th, 2013. The opening day of this property was moved up couple of times and I was able to book it for an opening day arrival just a couple of days before.

I like to check out new properties when they open while, at the same time, being fully aware that it usually takes a few months to get everything going smoothly. This Marriott was still a work in progress, mainly building wise, but the service was very good however.

This same property also contains Marriott Executive apartments that are on the lower floor of the same building. The food and beverage outlets as well as the pool and fitness center are shared.

The hotel is located in the Thonglor area of the Sukhumvit. There are a lot of mainly Japanese and Korean restaurants and some bars on Soi 55 that make-up the “center” of Thonglor. The hotel is within walking distance of the Thonglor BTS station that takes you to the heart of Bangkok.

I usually always use taxis in Bangkok as they are dirt cheap, but the traffic on Sukhumvit Road can be really bad during the rush hours. It took an hour for me to get from the Holiday Inn Bangkok to the new Marriott due to traffic.

There are many cheap street food eateries just in front of the hotel and on your way to the Soi 55. I had dinner at one of these establishments and paid 100 THB for two entrees.

The location worked very well for me and the area was definitely interesting. It won’t likely work as well for those that come to Bangkok for entirely touristic purposes, however.

I tried to check in early, but ended up being at the hotel around 1PM. There had been a German traveler checking in to the hotel before 6AM.

As the hotel is still partially under construction and most of the rooms are not even ready yet, there were not more than 10 check-ins for the day.

I knew the person checking me in from the St. Regis hotel where he had worked previously. Also, the front desk manager came to greet me. She remembered me from another Marriott property in Bangkok where she had previously worked before moving to open up this property.

The hotel didn’t have any suites or executive rooms available at the time. All that I can say is that these regular rooms are tiny. 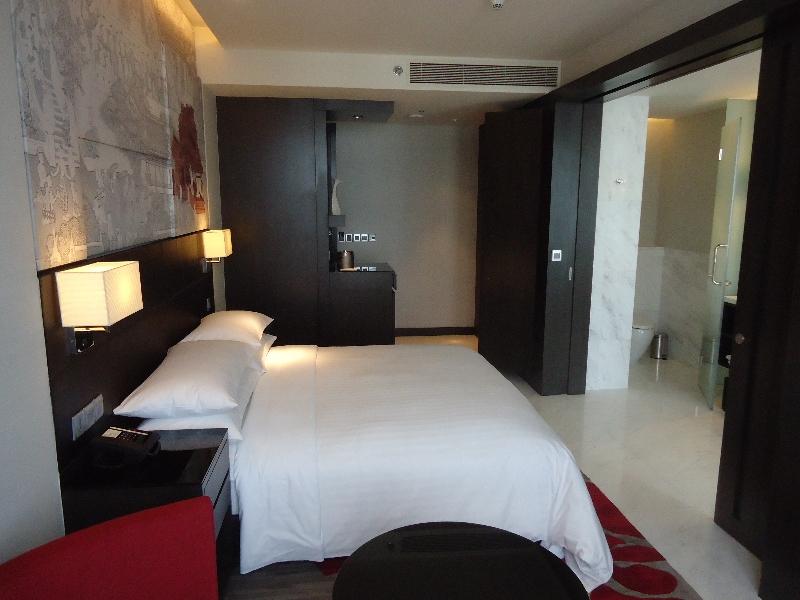 The rooms are of a livable size if you keep the doors to the bathroom area open as they are likely intended.

You have nice round bath tub that I didn’t test, next to the shower and the window.

The work desk was so small that I ended up working on the bed.

View of the surrounding area from the room.

By the way, I need to work my account back to Platinum later this year.

The hotel’s Executive Lounge on the 40th floor wasn’t open yet. It is scheduled to open in the first week of April.

The club/executive rooms should be identical to the regular ones once they are ready. Obviously the junior and proper suites are more spacious.

The executive level benefits were provided by the open food & beverage outlets.

– Breakfast at the 57th Street all day dining venue

– All day tea, coffee, soft drinks and cakes and sandwiches at the CCCo cafe in the lobby. You could choose everything besides alcoholic beverages and they would be complimentary.

– Evening cocktails at “the lounge” lobby bar. I was told that the basic drinks and wines would be complimentary, but they allowed me to sample their cocktail list as well.

Overall, I was very satisfied with the executive level benefits that were provided by these F&B outlets.

The pool and fitness centers were both on the 7th floor of the building. The changing rooms and the pool were not open yet at the time of visit. 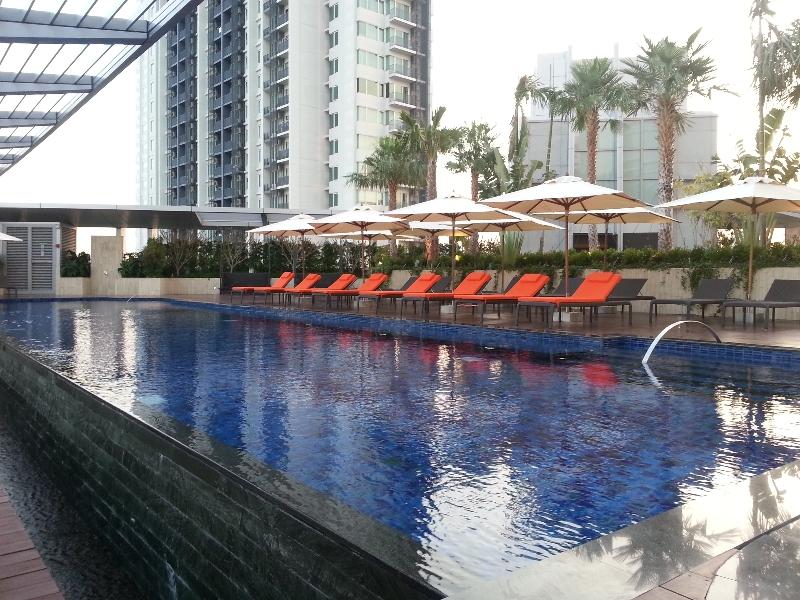 The pool was of modern infinity style and had plenty of sun chairs around.

The fitness center had the typical Life Fitness setup with quite a few cardio machines.

The District restaurant, 45th floor top floor open bar that will have stunning views once it is opened (I had a look), and the bar by the pool were not opened yet.

CCCo (Chocolate Cake Company) is the all day cafe outlet with cakes and sandwiches.

The Lounge is the lobby bar and you can order food from the 57th Street restaurant.

57th Street is the all day dining venue where the breakfast is served.

Overall, I found the hotel to be a good one and definitely wouldn’t mind returning once it is fully functional.

I wasn’t so sure about the neighborhood before my stay, but I found it to be interesting with more Asian/local flavor than other more touristic parts of Bangkok. The hotel will likely have heavy Japanese clientele due to the nearby Japanese village.

Marriott Bonvoy Off-Peak Awards For All Hotels Through November 30, 2020 (Book By October 15)