There was an interesting news piece last week about the new US Customs & Immigration preclearance location that is being planned to Abu Dhabi, the capital of the United Arab Emirates. You can read more about this on WSJ (here) and on USAToday (here). 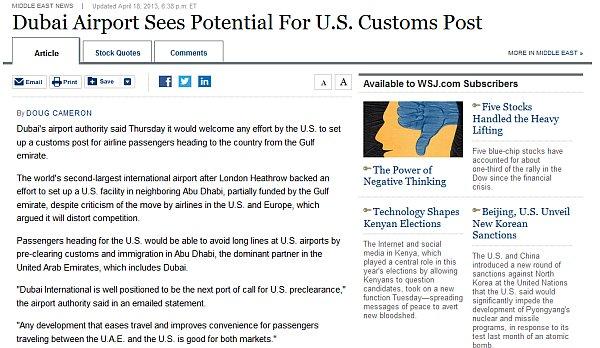 This would be very interesting move. The US currently has preclearance posts in Canada, the Caribbean, and Ireland. You can access the list of these current locations here.

The main benefit of preclearance is that the customs and immigration formalities are done at the foreign port and you then arrive as a domestic passenger to the States.

Opening of such a post to Abu Dhabi would be controversial, as the government of United Arab Emirates has promised to support it financially. The operation in Abu Dhabi would only benefit Etihad, the Abu Dhabi based “national” airline of the UAE, as it is the only airline flying to two US destinations from the airport.

Surprisingly, the Emirates, based in Dubai, is supporting this move and would likely prefer to have this facility at the Dubai International airport as well that serves far greater number of flights to United States.

It would be great if this preclearance would expand to other airports as well, but it must be very expensive to station employees from the US at the foreign ports for few flights per day. Why not have a proper immigration & customs staffing at the US airports?

Today’s Airfare of the Day goes to Emirates and their business class excursion round trip fares between Singapore (SIN) and...