IAG, the parent of British Airways and Iberia, already had a close to 46% share of the Spanish low cost carrier Vueling before most of the investors accepted its offer to buy rest of the stock. IAG now controls close to 91% of the airline.

It is interesting to see, if Vueling will be swallowed by IAG’s Iberia unit or whether it will stay independent. Anyway, Vueling will provide much needed connecting traffic for Iberia’s long haul flights.

Etihad’s Purchase of 24% Of Jet Airways

Etihad has been on the buying spree lately. It bought part of the German airline Air Berlin in 2011. It also owns 10% of Virgin Australia.

Now, the airline has bought 24% of Jet Airways for $380 million dollars. Jet Airways will issue new shares and is going to use at least part of the proceedings to pay down its debt. 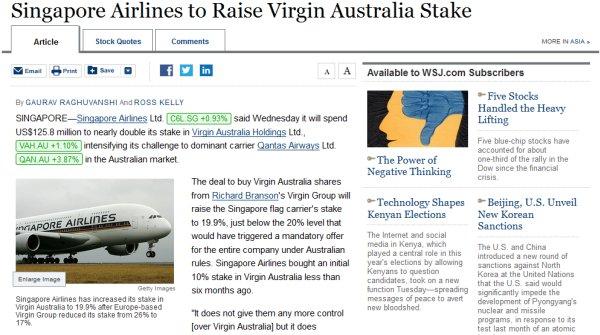 Singapore Airlines doubled its stake of Virgin Australia to 19.9% by buying shares of the airline from Virgin Group. If the airline had purchased 20% or more, it would have needed to make an offer for rest of the company as well.

Seems that the airlines have strategic problems are trying to buy into partnerships by buying majority or minority shares of other airlines. Only the time will tell if this is the right approach.