Update On The AMR (American Airlines) & US Airways Merger

There was an interesting article yesterday on Bloomberg about the expected timetable of the merger between the AMR, parent of American Airlines, and US Airways. You can access the piece here. 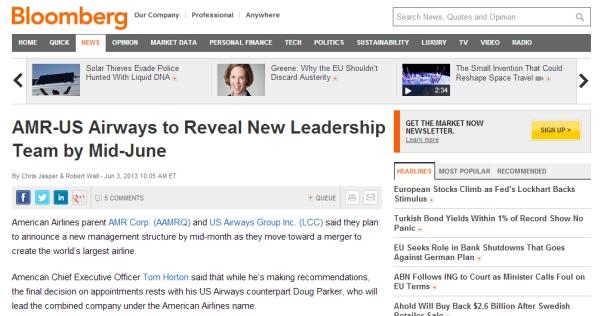 Both Horton (CEO of AMR) and Parker (CEO of US Airways) are at the IATA’s annual meeting in Capetown and gave interviews to the media about the progress of the merger.

– The merger is expected to close on the 3rd quarter

– Code-sharing between the airlines will commence shortly thereafter

Overall, the time table is rather optimistic and it is interesting to see what it will be at the end.

I would expect reciprocal benefits for American Airlines and US Airways elite members to take effect shortly after the merger is approved.

It is interesting to see, if this merger execution is more like Delta/Northwest than United/Continental. Only time will tell.