This topic is likely beaten to death today on various travel forums, as was the when Delta made similar change to its SkyMiles program earlier this year.

United is now making PQD’s (Premier Qualifying Dollars) part of qualification requirements starting in 2014. You can continue qualifying for your 2014 status under the current program rules. You can access United’s website that tries to explain these changes here.

Delta announced this change earlier this year that will also take place starting in 2014. You can read about the Delta’s MQD’s (Medallion Qualifying Dollars) here. 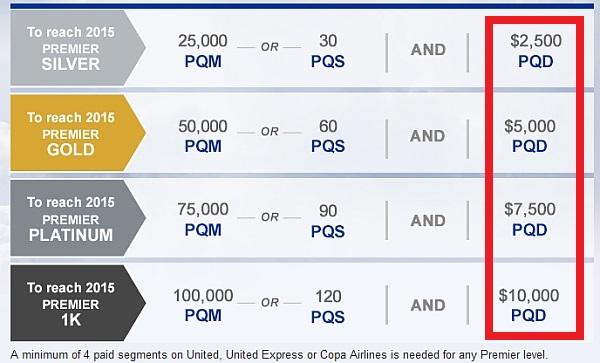 The requirement of PQD’s is not drastic for those that fly couple of international business class tickets yearly or fly business heavy domestic routes on weekdays.

This will, however, make qualifying to Premier 1K status very difficult for those that fly on cheap fares and on Star Alliance partner airlines IF their address is within the 50 United States or the District of Columbia.

The thing that I don’t like is the requirement of having the ticket on United ticket stock (016), if you want flights taken on Star Alliance partners to count towards the PDQ requirement. Sometimes it is not very clear, whose ticket stock the OTA (online travel agent) is going to use to issue the ticket on. If you use a real (human) agent, they can always plate the ticket on number of different airline ticket stocks including United’s.

You can always emigrate your Mileage Plus account outside of the United States for the PQD requirements to go away.

This is not an unexpected change considering that Delta announced something very similar earlier. I would imagine that AA would institute something like this as well starting in maybe 2015.

This change will make it very unlikely that I would continue crediting flights flown on Star Alliance partner airlines to Mileage Plus unless there is a premier mileage bonus involved in case of i.e. Lufthansa and Air Canada.

I have made it to the lifetime (mine or United’s) Premier Gold by having more than million program miles after my United and Continental accounts were merged, so there is really no incentive for me.