Expedia Rewards just sent me an email about 3-month Expedia Elite Plus trial they had extended until September and offer to keep it until February, 2015, by booking 3 nights at any Vip Access Hotel. 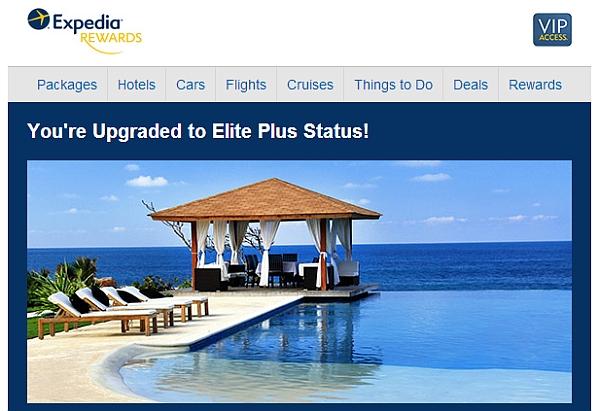 I recently booked twice one hotel in Bali and each time did a Best Price Guarantee to get $50 off of coupons for future stays. Then I used those coupons in Barcelona during the F1 week, when the hotel prices were through the roof. I also booked one dirt cheap hotel for a friend that week.

So, I got 5 hotel stays of the required 15 to get the Expedia Elite Plus status. Now, they would extend it all the way to 2015 IF I would do another three nights at Vip Access hotels, but I am likely to do so due to lack of any tangible benefits beyond getting priority phone support that should be in the US instead of their (so so) farmed out call center in India. 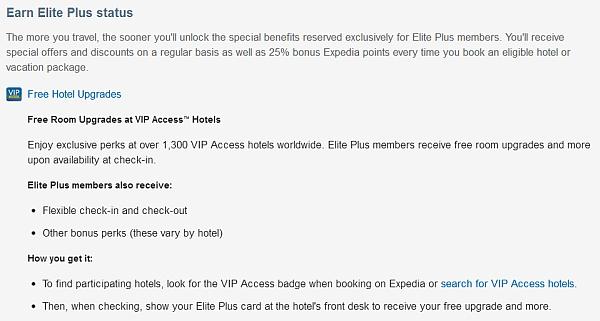 Here are the Elite Plus benefits:

– Dining discounts – This is a benefit? Maybe if they give at least 50% discount.

– Butler service – I could care less. I can unpack by myself.

– Room upgrades – Surely these are based on availability?

This sounds great, but once you realize that Expedia Rewards points are so watered down that you will merely get 1.25% discount in the form of points instead of the regular 1%, why would I even care? I do take the points, but this will no way change my booking behavior to make me more likely to book on Expedia instead of their competitors.

If you really really want to get the Expedia Elite Plus status, here’s the cheapest way. Expedia sells some hostels for maybe $10 to $15 per night (depending on the city of course). Just book the hostel bed few times and check in, but don’t stay. These also count as a hotel stay for the Elite Plus status.

The only tangible benefit that I see is the priority customer service that, at least used to be, based in the United States instead of ringing in India that handles the Expedia’s regular calls.

Expedia really should spice up the benefits of their Expedia Rewards and Elite Plus, if their goal is for this program to generate additional bookings. I do book airfare on Expedia, as I like the process and Expedia’s ticketing ability. I don’t take their Expedia Rewards program and points even consideration. But, if they throw some points on my way, I am willing to collect them.