Frontline airline employees used to be well empowered and good at fixing things using the rather complicated terminals and long DOS/Unix type command line queries. To make things “easier”, airlines have introduced graphical front end systems trying to dumb the process down and making it easier for them to outsource the check in process for contractors. 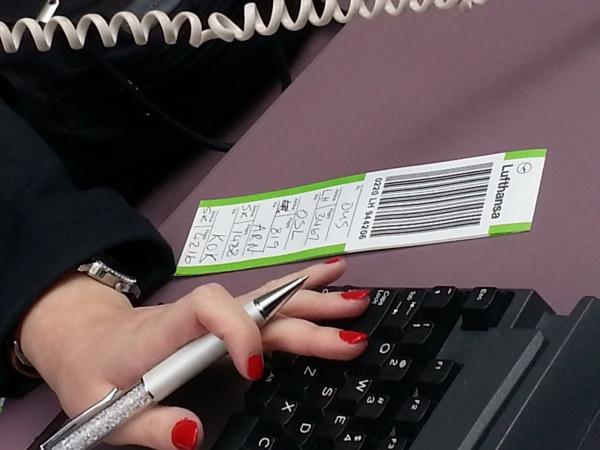 I came across this couple of weeks ago, when I was flying on United issued award ticket from Glasgow to Kokkola and had three transits along the way in Düsseldorf, Oslo and Stockholm. You can read more about this award ticket success here.

The contractor working for the Lufthansa marketed but Eurowings operated flight out from Glasgow was unable to print out the luggage tag for my bag from the origin to destination. They were suggesting that I should pick it up in Düsseldorf (didn’t want to deal with it there as I was heading for the city for few hours), in Oslo (30 minute transit) or in Stockholm (25 minute transit) and recheck it. The last two would have been impossible due to rather short transit times.

So, I requested that they simply write a manual luggage tag. Airlines always have these manual tags available that the check in personnel can use to get the bag to destination, but they are usually rather hesitant to use them. In this instance, the person checking me in had to get it ok’ed by her supervisor. Then they mistakenly wrote the order of flights in the opposite order, but caught this and gave me a new correct tag at the gate.

I could have checked the bag only to Düsseldorf and rechecked it there, but why waste everyone’s time, when the airline certainly can check the bag through the entire itinerary? Sometimes I feel that the airlines have dumbed down the programs that employees or contract ones are using way too far.