There was an interesting development on the though to be smooth merger with American Airlines and US Airways today. The United States Justice Department, six attorney generals and the district of Columbia filed a civil antitrust lawsuit to block the merger claiming that it would lessen the competition and lead to higher air fares to passengers. You can read more about this on Reuter’s website here and Department of Justice website here. 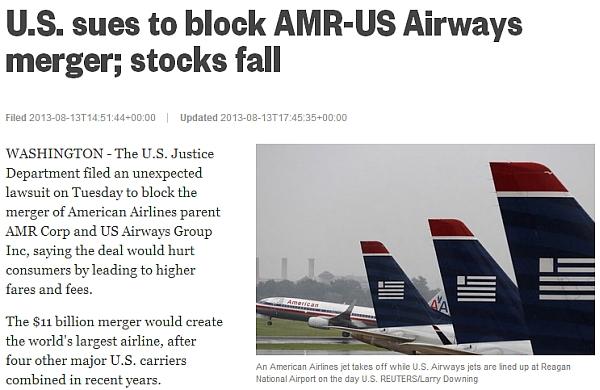 This was unexpected development after the mergers between United/Continental and Delta/Northwest were not objected. The Justice Department cited on their release US Airways Executives:

· President Scott Kirby said, “Three successful fare increases – [we are] able to pass along to customers because of consolidation.”

· At an industry conference in 2012, Kirby said, “Consolidation has also…allowed the industry to do things like ancillary revenues…. That is a structural permanent change to the industry and one that’s impossible to overstate the benefit from it.”

· As US Airways CEO Parker stated in February 2013, combining US Airways and American would be “ the last major piece needed to fully rationalize the industry.”

· A US Airways document said that capacity reductions have “enabled” fare increases.

The US Airways and American Airlines intend to fight this lawsuit. It will nevertheless make the merger between these two airlines now unlikely.

This was definitely an interesting and unexpected development after the previous mergers that were not objected. This doesn’t mean that the merger between two airlines couldn’t eventually happen, but will at the minimum significantly delay it. If the merger between these two airlines is approved, four airlines would control 80% of the US commercial air travel market.

Marriott Gift Card Promotions: What Is The Best Deal?