Companies tend to send out the negative information out on Friday nights or on the eve of major holidays, so that members and media wouldn’t notice them and likely would just delete the email on Monday morning.

Expedia is no different. They sent out an email “Earn more and redeem faster, with Expedia Rewards” very late on Friday night that will negatively affect both the earning and redeeming side of the Expedia Rewards points. Last time Expedia devalued their program in late 2011.

The main change on earning of points is that you will only earn 1 point per 5 USD in airline ticket spend. This used to be 1 point per USD when the program was launched and then changed to 1 point per two USD in 2011. 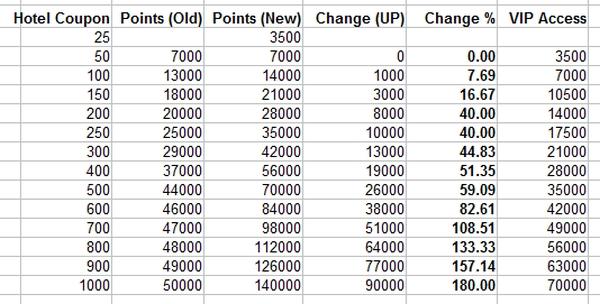 The number of points required for hotel coupons go up my maximum of 180%. The previous program was giving better value for very high coupon redemptions. Now, the value is exactly the same.

Expedia is giving double the value for hotel coupons that re redeemed for their VIP Access hotels until December 31, 2013.

When the program was devalued last time in late 2011, I wrote that I don’t even consider the number of Expedia Rewards points that I would earn when I make bookings using Expedia. I m surprised that they are devaluing the hotel awards so severely considering that Expedia has very high margins on hotel bookings (read more here).

It is not ok that Expedia doesn’t  allow members to redeem at the old award level, but instituted these changes overnight and without any prior notice.