LoyaltyLobby reader from forwarded me a copy of the email that he had received for being an Expedia customer about a class action lawsuit. According to the lawsuit Expedia had failed to disclose that “taxes & fees” were not just taxes and fees but included a profit element as well. You can access the website of this class action lawsuit here.

The Class Action alleges that Expedia Inc. breached its contracts with customers by, among other things, charging a Service Fee that contained a profit element and by failing to disclose that profit to customers.  The Class Action seeks a determination of whether Expedia Inc. had the contractual obligations alleged by the Class and, if so, if its conduct could amount to a breach of those obligations.

Expedia Inc. denies all the allegations made against it in the Action and denies that the members of the Class are entitled to any compensation.  By certifying this Action as a class proceeding, the Court has not determined the merits of the Plaintiff’s claims or Expedia, Inc.’s defences.  The Plaintiff will be required to prove his allegations at a trial in order to entitle the members of the Class to then advance, based on the specific details of their transactions with Expedia, Inc., individual claims for breach of contract and for compensation for any breach that may be found to have occurred.

Here’s rate display for a hotel in Siem Reap (I was thinking of flying there for the weekend to check out the relfagged Park Hyatt). Is it not clear how much are the real taxes of these taxes & fees? When you click the “taxes & fees” you get the bubble that contains text that must have been written by a lawyer. 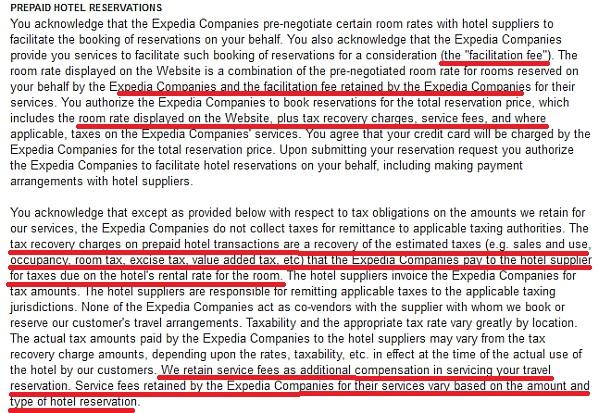 Decided to check the Expedia’s Terms of use. It is surprising that Expedia doesn’t refer to commission but rather a “facilitation fee”. 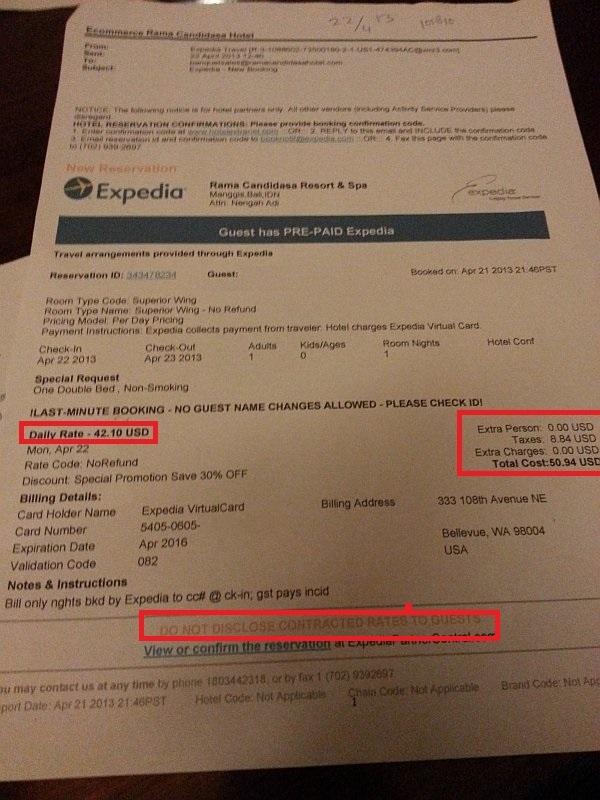 Here’s copy of Expedia’s order to a hotel in Indonesia for my one night stay. The taxes/fees were 21%.

Here’s copy of my receipt. Expedia charged exactly the same “taxes/fees” of 21% on their displayed price.

It would be better if Expedia would come clean what are the real taxes that is paid by the property and not “taxes & fees”. Of course, Expedia doesn’t want to disclose the real tax amount. Everybody could then just calculate the Expedia’s nett price.