Sometimes, when you travel, the s#%$ hits the fan and, lets be frank, the airlines in Southern America are not known for their customer service. Even then, you should always have a deep breath first and think twice (maybe more than twice) before you write a public rant and a complaint to the CEO. 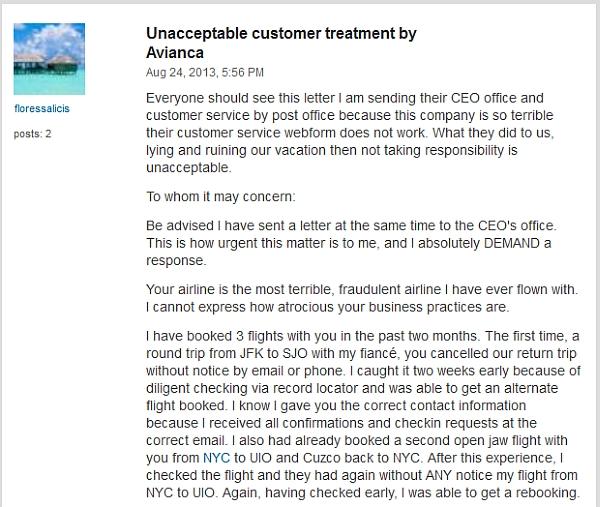 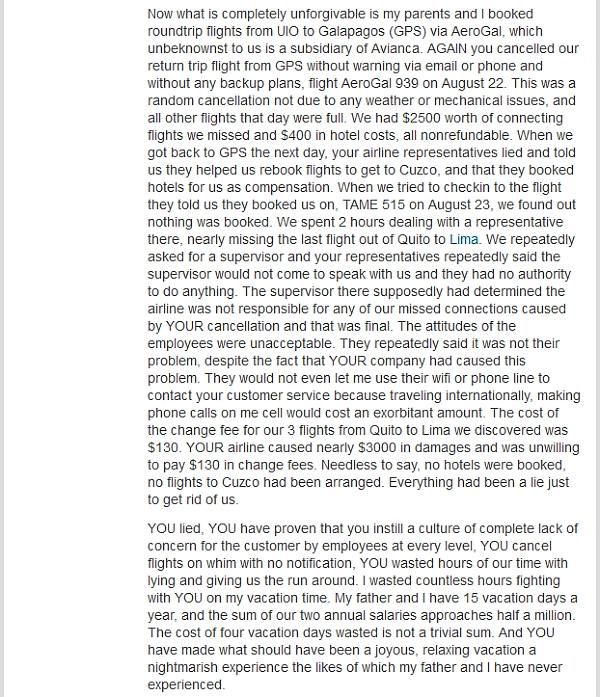 WOW! This is one of the worst and least efficient rants that I have seen for a while. I have no doubt that something has gone terribly wrong, but you won’t achieve anything by sending something like this to the airline CEO or putting it up on a public forum on the internet.

Now, let’s try to cut the complaint down a bit:

Will likely result this complaint to go to the trash bin.

What has happened earlier is irrelevant.

Now what is completely unforgivable is my parents and I booked roundtrip flights from UIO to Galapagos (GPS) via AeroGal, which unbeknownst to us is a subsidiary of Avianca. AGAIN you cancelled our return trip flight from GPS without warning via email or phone and without any backup plans, flight AeroGal 939 on August 22. This was a random cancellation not due to any weather or mechanical issues, and all other flights that day were full. We had $2500 worth of connecting flights we missed and $400 in hotel costs, all nonrefundable. When we got back to GPS the next day, your airline representatives lied and told us they helped us rebook flights to get to Cuzco, and that they booked hotels for us as compensation. When we tried to checkin to the flight they told us they booked us on, TAME 515 on August 23, we found out nothing was booked. We spent 2 hours dealing with a representative there, nearly missing the last flight out of Quito to Lima. We repeatedly asked for a supervisor and your representatives repeatedly said the supervisor would not come to speak with us and they had no authority to do anything. The supervisor there supposedly had determined the airline was not responsible for any of our missed connections caused by YOUR cancellation and that was final. The attitudes of the employees were unacceptable. They repeatedly said it was not their problem, despite the fact that YOUR company had caused this problem. They would not even let me use their wifi or phone line to contact your customer service because traveling internationally, making phone calls on me cell would cost an exorbitant amount. The cost of the change fee for our 3 flights from Quito to Lima we discovered was $130. YOUR airline caused nearly $3000 in damages and was unwilling to pay $130 in change fees. Needless to say, no hotels were booked, no flights to Cuzco had been arranged. Everything had been a lie just to get rid of us.

Here are are getting to the details what this complaint is about.  Seems that there has likely been two separate tickets. The AeroGal is certainly responsible to get to the passengers to the destination that is on THAT ticket, but is not responsible for other arrangements that the passenger might have done. If you are booking flights on separate tickets, there is always possibility that you may have to throw them away.

If the airline representative promises to rebook your flights, always make sure that they have done it and the ticket has been reissued. Don’t leave before you have this information.

The passenger tries to negotiate but at the same time states that the negotiation is over? Irrelevant.

If you are going to sue, then sue. Doesn’t make sense to threaten to sue, as most will never follow through. Why United CEO would care what problems the passenger might have had on an alliance airline?

I doubt that there is a response to his rant.

Everybody, who follows my writing here on LoyaltyLobby, knows that I am a pro-consumer. Don’t ever write a complaint when you are mad. Let it sit for few days and make sure that you only include relevant information without emotional rant, when you get down to writing it.

You should always know the risks when traveling on separate tickets and leave plenty of time between the flights.