When I write about hotel promotions and sales, I always make it very clear that, if you book and prepay a non-cancelable and nonrefundable reservation, your plans should be firm.

But what happens when a hotel wants to cancel your reservation that you have made and prepaid more than 6 months before?

A LoyaltyLobby reader contacted me last week about a prepaid  and non-cancelable reservation that he had made for the Westin Pazhou on January 16, 2013, for five days during Canton fair in October. 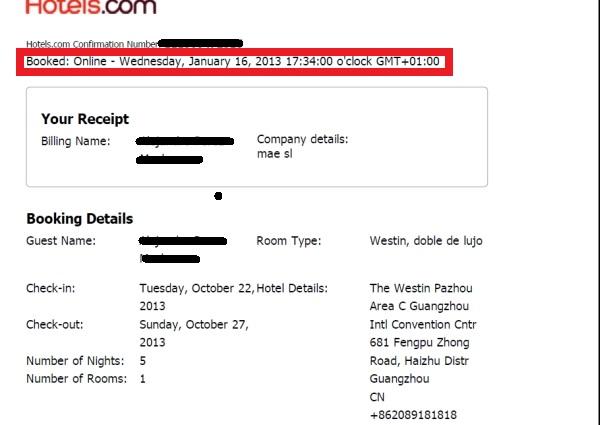 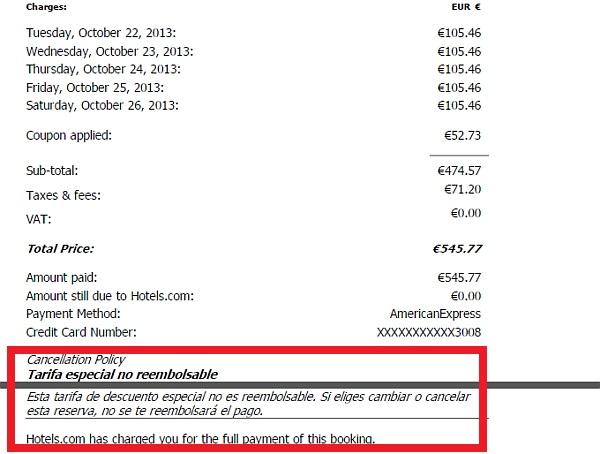 The price on Expedia owned Hotels.com had been 545 Euros for the five nights. The credit card was charged at the time of purchase. Also, the cancellation terms were very clearly listed on the receipt. 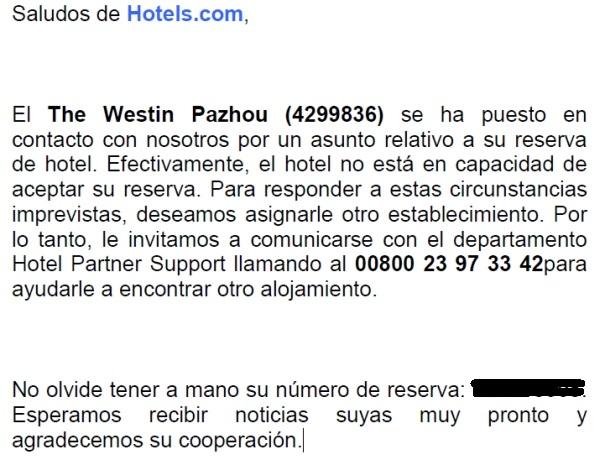 Then, six months later, Expedia sent the email above informing the customer that the Westin Pazhou is not able to accept the reservation and that the client should call Expedia to discuss with them alternate options.

When the reader sent me the email, I decided to check the availability of the Westin Pazhou hotel on: 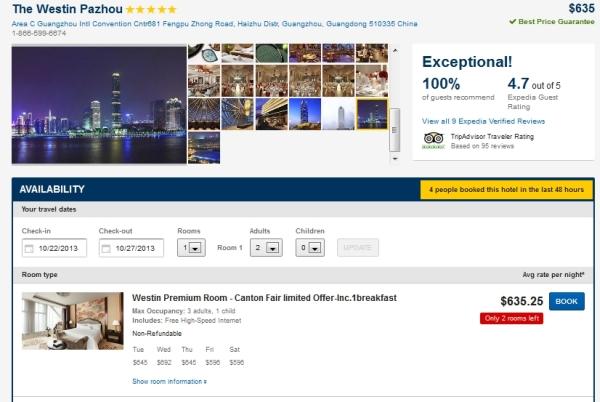 All the sites were still selling the hotel albeit at a much higher price. The reason that was given for the cancellation (no availability) was basically a lie.

As an alternative, Expedia had offered some Chinese hotel more than 12 kilometers from the fair for the same price. 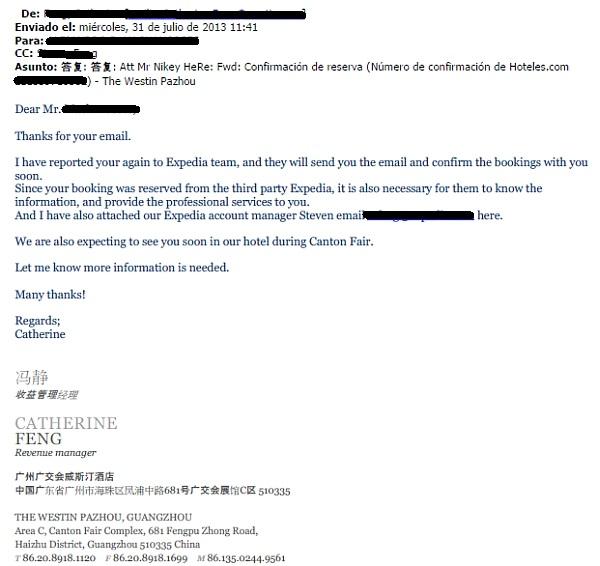 The reader had also been in touch with the hotel and their revenue manager had sent him a reply.

A LoyaltyLobby reader contacted me about a problem that he is having with the Westin Pazhou hotel.

– Expedia (the parent of Hotels.com) contacted the reader on July 30 that the hotel is full and that they would need to relocate the person (correspondence from the hotel/Expedia/Hotels.com attached)

– I just checked and the property is still available for reservations on Expedia, Hotels.com and on SPG.com. (screenshots attached from all – I just took them)

What is going on here? Did the property forget to close the rate plan that they offer to Expedia and now they realize that they can get better price and would prefer to cancel the prepaid reservations?

Surprisingly (not), none replied to my email that had a 4PM PST Friday deadline. I guess that they are all ashamed trying to break the contract that the buyer has with Hotels.com, which in turn has a contract with the Westin Pazhou via their Expedia parent.

The reader has received an email, however, that his reservation is now confirmed at the Westin Pazhou hotel.

The revenue manager of the Westin Pazhou hotel likely forgot to close the rate plan that they offer for Expedia.com for the Canton fair dates. They would rather prefer maximizing the revenue for the dates in question by canceling prepaid reservations and reselling the rooms at much higher price.

It is highly unethical for the hotel trying to cancel the prepaid reservation in order to resell the rooms at a much higher price. It is very difficult trying to argue that a rate of more than 100 Euros per night would have been a mistake.

Do you think that Hotels.com would refund the payment if you would need to cancel a prepaid and noncancelable reservation? Of course not.

Thankfully the hotel has decided to honor this specific reservation, but likely those that are less vocal have been moved elsewhere or just have had their payment refunded.

Unfortunately, you often need to be vocal and to know your rights with even supposedly respectable companies such as Expedia and Starwood for them to make things right..