British Airways introduced fares out from London Gatwick earlier this year to select destination that didn’t include any checked in baggage without a fee even for BA and Oneworld elite members.

Now this model is expanding to London City and Heathrow airports as well. 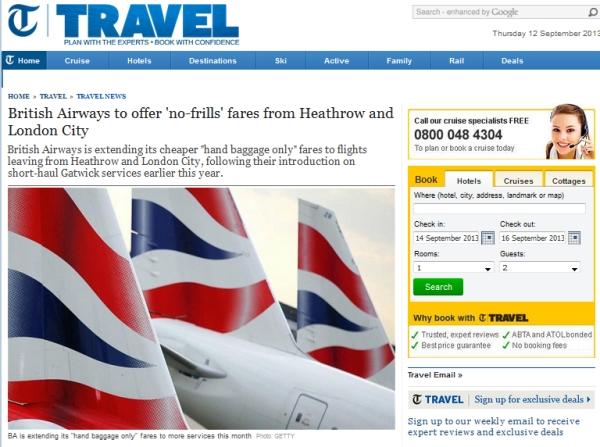 British Airways spokesman tried to put some lipstick on a pig:

Low cost carriers have always competed strongly in the leisure market and they are now increasingly focusing on the business travel segment. With our generous baggage allowance and complimentary food and drink, BA short-haul already offers great value. The introduction of these new fares will help address price perception issues ensuring our customers’ always consider us when choosing which short-haul airline to fly with.

If it proves as successful, we plan to roll it out across the whole short-haul network in the coming months.

British Airways is trying to sell this as a reduction of the price of a flight for those that don’t need any checked baggage allowance.

I would imagine that what happens in reality is that the former lowest prices are new HBO ones and those that need to have checked in baggage allowance end up paying more. It likely won’t take too long before all the in-flight service will be for cash only.