United blames “human” error for loading base fares at zero dollars for the US market yesterday that were bookable for about an hour midday. 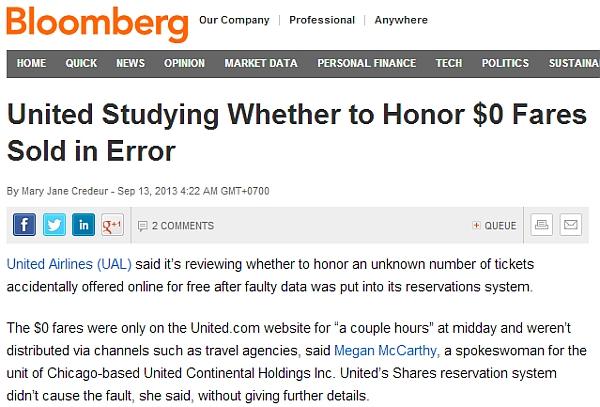 The airline issued tickets and charged the security fees associated with these zero fare tickets. You can read more about this United mishap on Bloomberg’s website here and on Forbes’ website here.

United had a “technical” error last year, when the airline issued award tickets touching Hong Kong for 4 miles each. Those tickets were later canceled.

According to a United spokesperson, the airline is currently studying what to do with this sale.

It is quite unbelievable that a human error allows an airline to load zero fares into its internal ticketing system and these zero base fare tickets to be actually issued.

You would imagine that an airline as big as United would have some check and balances in place to ensure that the filed fares are correct.

Airlines always blame technical or human errors for fare “mistakes”.  Airlines have chosen to issue tickets automatically without human intervention. They could always choose to have fare/ticketing desk to have a look at each and every PNR before the ticket is issued to ensure that proper amount is charged. Obviously this would be too labor intensive and expensive.